Composer, arranger and pianist Jay D'Amico, who made a strong impact on the jazz scene with his release of Ponte Novello in 2001, has returned to the inspirations of Italy on his new release, Tuscan Prelude. The recording is a further exploration of D'Amico's unique fusion of jazz and classical influences and features eleven original compositions that D'Amico penned during one of his frequent visits to Italy.

“Tuscany holds a special place in my heart because of the Renaissance and the timeless art and music that that era has given us,” says D'Amico. “I've studied both classical and jazz music, and I love them both,” he continues, as he explains his approach. “At this point in my career, it feels right to combine them in one recording because I feel I've got a strong enough grounding in both to allow my own style to emerge.”

Joining D'Amico on Tuscan Prelude are bassist Marc Johnson and drummer Ronnie Zito. D'Amico says that the music on Tuscan Prelude called for a bassist who could execute difficult passages with a bow, and “Marc was just amazing with that.” Zito, who D'Amico first met when he was pianist in residence at New York's Windows on the World, also collaborated with D'Amico on Ponte Novello. “Ronnie is a drummer of great interpretive depth, insight and versatility,” adds D'Amico.

Bassist Greg D'Amico (the pianist's brother) and drummer Vinnie Favata appear on the CD's final track, “Aria in D.” “Greg just swings, and Vinnie--who comes out of the Rat Pack era and who played with Sammy Davis, Jr.--has an incredibly sensitive feel on the drums,” enthuses D'Amico. “I couldn't have made a recording without including them somehow.”

Given the seamless performance that the trio offers on Tuscan Prelude, it's remarkable to learn that they barely rehearsed before joining forces in the studio. “I like having that edge, that freshness,” says D'Amico. “What you're hearing is basically a live recording.”

D'Amico's sound has evolved over the years, honed in performances with his own trio and a variety of other musicians, most notably bassist and lifelong friend Milt “the Judge” Hinton, whom the pianist credits as one of the primary influences on his career. “Several years back, I played a few of the tracks on my earlier release, Ponte Novello, for Milt--he'd only performed on one track on the CD--and he just smiled at me and said, 'Man, you found your niche.”

That niche can be described as the melodious intersection of two very distinct musical roads, which D'Amico says are actually not that diverse to his thinking. “My music is somewhat comparable to opera, in that it's sing-able, even though my compositions are obviously all instrumental. Jazz starts from that same European harmonic tradition and incorporates African rhythms. I'm just finding my own way around that,” he explains.

Born into a family where music was omnipresent, the young D'Amico began to play piano when he was eight years old. Coming of age in the 1960's, D'Amico says his earliest exposure was to American popular music, from the Cole Porter tunes his mother would sing around the house, to his first experience as a performer in a rock group. Under the auspices of Art Podell of the New Christie Minstrels, D'Amico, his brother and three cousins, recorded a single which enjoyed near hit status before the vagaries of the music industry derailed them.

The drive to become a pianist took a firm hold when young D'Amico heard the music of Polish-born composer and pianist, Frederic Chopin. “Actually I saw the actor Cornell Wilde portray him in a movie,” he remembers. Later in college, his piano teacher told D'Amico that the melodies of the Italian opera were the greatest influence on Chopin's music. “I remember being surprised at that, but then I saw that the lyricism of opera, combined with the Polish mazurka and polonaise, came to create his style. I thought, 'I want to be able to do the same thing, to play it all!'” An early Oscar Peterson performance on television, during which his mother told him “This is jazz and they're making it up as they go along,” also resonated strongly with the burgeoning young performer and composer.

D'Amico first met Milt Hinton in 1974 in a jazz workshop, and the two immediately took to each other so strongly that within a short time D'Amico started teaching the workshop with Hinton. Their collaboration as educators would last for some 18 years, until 1992. Hinton joined his protege on D'Amico's recording debut in 1982, Envisage, which also featured drummer Bob Rosengarden (it was re-released on CD in 2003.)

In addition to Milt Hinton, another musician whose influence D'Amico cites as key is Mike Longo, established pianist and musical director for many of Dizzy Gillespie's bands. Longo's CAP Records has released all four of D'Amico's CD releases.

From 1984 through September 10, 2001, D'Amico performed as the Pianist in Residence at New York's Windows on the World. In 1990, he released the solo recording, From the Top. Recording with a trio comprised of bassist Ben Brown and drummer Ronnie Zito, he released Ponte Novello in 2001. The CD featured D'Amico's original compositions along side the pianist's arrangements of arias by Puccini, Verdi and Bellini. He has also appeared on Hinton's The Judge's Decision (1985) both as pianist and co-composer with his brother, Greg. Show less

”Jay D'Amico plays piano with a gossamer touch and canny sense of style... there is a certain shapeliness to each solo and a tangible sense of touch, like good sculpture.

“Excellent piano playing... Improvisation is original, creative, clever and yet still retains musicality as opposed to cliches--a trap that some of the big name piano players fall into.

“Truly a unique combination of Italian classics and American Jazz..

”Jay D'Amico plays piano with a gossamer touch and canny sense of style... there is a certain shapeliness to each solo and a tangible sense of touch, like good sculpture.

“Excellent piano playing... Improvisation is original, creative, clever and yet still retains musicality as opposed to cliches--a trap that some of the big name piano players fall into.

“Jay D'Amico displays an exquisite touch, impeccable timing, and a remarkable sense of harmonic inventiveness. He is one of the most promising young pianists around today.” 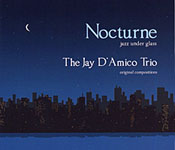 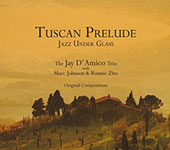 All About Jazz musician pages are maintained by musicians, publicists and trusted members like you. Interested? Tell us why you would like to improve the Jay D'Amico musician page.