Concord Jazz announced the release of Escaping Shadows, the sophomore album from alto saxophonist and bandleader Benny Reid. On his new release, 28-year-old Reid reveals the next vital step in his maturation as an adventurous artist and an ambitious composer. The album features nine originals and one cover song, and will be available everywhere September 15, 2009.

Produced by Reid and Chris Dunn, Escaping Shadows spotlights Reid and his band as embarking on a passionate, largely upbeat and lyrical journey. The album includes pieces that were written around the time of his debut album Findings, which the saxophonist cites as a highly creative period for him. "Half the songs on Escaping Shadows were written before the first record came out," he says. "For example, I had hopes that the tune "Escaping Shadows" would make it on to Findings, but there wasn't enough time in the studio to record it. It turned out for the best because I restructured it, building in new elements and making it stronger."

Reid recorded Escaping Shadows with his own group to build upon the rapport the members developed while working on the road together for the past two years. "We are a family. We've developed a way to work on my compositions and grooves." Members of the group include guitarist Richard Padrón, wordless vocalist Jeff Taylor and percussionist Ryan Fitch, all of whom also played on Reid's debut album. In addition, Reid recruited pianist Pablo Vergara, bassist Daniel Loomis and drummer Kenny Grohowski.

Yet Reid's alto takes the melodic lead on the tunes. He says, "I want to create the most beautiful melodies I possibly can." That's especially the case on the sublime tune, "The Most Beautiful Girl I Ever Knew," which is dedicated to his sister who passed away when Reid was 13. "She inspired me," he says. "I wrote this in college in a practice room. It was a very emotional experience for me. I escaped into the music after her death, knowing that I would honor her with it someday." He also adds, "I've always found my musical voice the truest way to express my feelings; it's easier for me to pick up the saxophone and express myself creatively through my horn, than it is through my speaking voice. I feel that I can find the heart of my soul when I play. I try to create the most moving melodies possible that represent my influences. My sister is my most dominant influence, and I strive to achieve some sort of musical comparison to her with every song I write."

A graduate of the prestigious music program at Indiana University, Reid grew up in a musical household where he was exposed to a variety of styles. From his New Jersey home, he would often go to New York to catch such musicians as Sonny Rollins and Phil Woods and even participate in jams at the Blue Note and Smalls. An early mentor was Buddy Rich's alto saxophonist Andy Fusco, and Reid began writing music when he was 14. While his musical interests ran the gamut from the brass-infused pop band Chicago to the King of Pop Michael Jackson, guitarist Pat Metheny was his biggest influence. "I remember as a child being in my father's arms while he danced around the house to Metheny music," Reid says. "He was Pat's biggest fan. So I soaked that influence and it hit me hard as I started to compose."

While Reid had to distance himself from the gravity of Metheny's touch, there are still elements in the mix, including enlisting Taylor to sing wordless vocals to embellish the music. Reid's music also has a strong emphasis on guitar. "I love the deep and diverse sound Richard gets," he says. "A theme of this record was to use his guitar with a distortion sound, like on the tune 'Cutting,' which you don't hear much in jazz today. It's one of my favorite tunes on the album. And on the second tune, 'Five Years Later,' Richard plays four different guitars-from Acoustic to Strat-to give the piece several layers." Even though it leads off the CD, the bright, upbeat "The Final Chapter" was the last tune Reid wrote before the sessions, while the following tune, the lyrical "Five Years Later" was begun five years earlier. "I had the intro and hook, but it didn't feel finished," says Reid. "I knew I would return to it eventually, but I was surprised and excited when I discovered a bridge and coda. Another older piece, "Firelight," has been a band staple onstage and is a favorite with audiences," says Reid.

Other noteworthy originals include the volume-surging, rock-grooved "Facing the Edge" and the hybrid "New Days" that starts with a jazz groove followed by a jungle beat in the middle section and features Reid and Padrón soloing in counterpoint. The lone cover of the CD is a pensive rendering of Metheny's beauty, "Always and Forever," which features Reid and Padrón in a duo setting with each playing the melody. "This was a nice moment to share with Richard," Reid says. "I wanted to do the opposite of the original, which is highly orchestrated and dense. And I didn't feel the need to solo on it." As for the high register of his alto playing, he adds, "I try for the warmest sound I can get. I am ok with not sounding like a traditional alto sax."

Escaping Shadows ends with the title track, which opens with a slow and extended introduction before buoying with highly textured energy. Reid says the tune represents growth. "I'm trying to come into my own," he says. "So I am escaping the shadows of my influences and finding myself. I'm still evolving as a player and a composer. That's what Escaping Shadows is all about. I'm on the way." 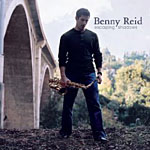 All About Jazz musician pages are maintained by musicians, publicists and trusted members like you. Interested? Tell us why you would like to improve the Benny Reid musician page.