Eric Frazier was born in Harlem, New York City. He was raised in Brooklyn, New York in a family of eight children. He ran track and road races for 27 years. His love of the physical culture and creative expression led him to the study of the Conga Drum, Djembe Drum and African Dance. He has since expanded his artistic endeavors to singing, trap drums, tap dance, and percussion.

His interest in Dance, Music, Theater and Writing are evident in his background. Otis Gould, former Chi-lites drummer and college friend, taught him to play Congas for bands. He learned the Djembe drum from Ibrahim, famous master teacher from The Dance Company of Senegal. Eric was inspired in dance by his brother, the gifted and talented Gary Ellis Frazier, formerly with The Alvin Ailey Dance Company. Eric has performed with such dance groups as Katherine Dunham, Olatunji, Charles Moore, Chief Bey, The International African Ballet, and Varshaa Bardhan and Chandra Baneyei of The Tanusree Shankar Dance Company of India (Headed by Ananda Shankar, son of the great Ravi Shankar).

Eric was a solo artist for the play “Wemmins of the Dark” at the historic Henry Street Playhouse in Soho, New York City and went on tour in the New York Metropolitan area performing his own poetry for The Rennick Playright Company. He is the author of the following books of poetry: “Family, Friends and You,” “Thought of a black Child” and “Black Gold and You.” Additionally, Eric is the author of numerous scholarly articles, Jazz Columns, publications and letters. He has lectured at numerous colleges and Universities and is available for lectures, workshops and presentations.

Eric has had the pleasure of great artists accompany him in his band and on his recordings, such as Reggie Workman, Robin Kenyatta, Carlos Garnett, Jimmy Ziegler, Bob Cunningham, Bill Saxton, Stanley Banks and Danny Mixon. In addition to performing with legends such as Pharaoh Sanders and Jack McDuff, his recordings have also included the talents of Jeremy Pelt, Anthony Wonsey, Wayne Escofery and Maurice Brown. Max Roach, renown as one of the most legendary Jazz Drummers in history, first heard Eric as a solo artist on October 25, 1998. He was inspired to get on the Mic and tell the audience to savor the moment because they were in the midst of a great conga player.

Eric's latest CD “The Eric Frazier Quintet Live @ Cecil's Jazz Club volume 1&2,” is catapulting him to the very top of the music movers and shakers. We are confident that this two volume set of CD's will add enhanced pleasure to your every listening moment.

Eric was educated at the famed “Boys High School in Brooklyn, New York. He received a Bachelor of Arts degree in three years at Southern Illinois University, (Carbondale, Illinois) in Black American Studies with minors in Economics and Sociology and Cultures and two Masters degrees and a Doctoral ABD at Columbia University Teachers College in New York City in Education Administration and policy.

Eric Frazier at Rustik: Not Your Average Tuesday Night in Brooklyn

Eric Frazier: In Your Own Time

Eric Frazier: In Your Own Time 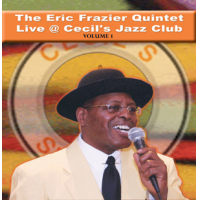 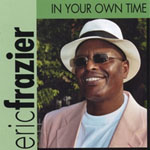 In Your Own Time

All About Jazz musician pages are maintained by musicians, publicists and trusted members like you. Interested? Tell us why you would like to improve the Eric Frazier musician page.