Salvatore Bonafede was born on August 4, 1962 in Palermo, Italy and began playing the piano at the age of four; at first he was self-taught, but later he received classical lessons and in 1973 entered the Conservatory of Music in Palermo. As a teenager he started gigging with local groups and big-bands, accompanied several visiting American Stars, worked in the orchestra for a number of theatrical performances as well as appearing on national Radio and Television programs. Bonafede's early influences were McCoy Tyner and Chick Corea, and he also become steeped in the work of Duke Ellington, Thelonious Monk, and Charles Mingus.

Salvatore Bonafede imageIn 1986 Salvatore Bonafede won a scholarship to Berklee College, where he graduated three years later. Since living in Boston, Mass. he joined the Jerry Bergonzi Quartet with whom he toured Australia (1987-88), and tought a clinic at Harvard University (Cambridge, Mass.). In 1989 Bonafede moved to New York where he led his own groups and performed as a sideman with the Vanguard Jazz Orchestra, Dewey Redman, Joshua Redman, Lew Tabackin and Joe Lovano with whom he performed at Town Hall.

In 1990 Salvatore started recording for the japanese label Ken Music as a leader and composer: his first CD, "Actor-Actress", has been internationally well-received by the critics and voted "A" by The Village Voice; he also recorded with Marc Johnson, Paul Motian, Paolo Fresu, Judi Silvano, Randy Brecker, John Abercrombie, Marvin "Smitty" Smith, Jerry Bergonzi, Tim Berne, Ralph Towner, Dave Douglas, Michael Formanek, Enrico Rava. In 1991 magazine Musica Jazz voted him "Top young player" of the year and in 2001 received the "Top record of the year" award.

Bonafede moved back to Italy in 1994 and worked with Lester Bowie, Tom Harrell, Bobby Watson and John Scofield, with whom he toured in 1995. Then he took part in a number of major european festivals with a 12-piece band led by Joe Lovano and performed for "The 2005 Nightlife Awards" at Town Hall in New York.

In addition to his performing and recording activity, Salvatore Bonafede writes for film scores (two awards for best soundtrack in 2003 and 2004) and for TV movie series ("Emmerdale" in Finland and "Emmerdale farm" in Sweden). He is also active in jazz education, teaching at the Conservatory in Trapani, Italy and conducting workshops and clinics. 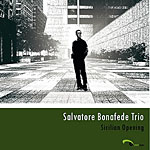 Among the Wave of...

From: Sicilian Opening
By Salvatore Bonafede

All About Jazz musician pages are maintained by musicians, publicists and trusted members like you. Interested? Tell us why you would like to improve the Salvatore Bonafede musician page.