Ron got started playing standards for dances and receptions around his native Lansing, where his father was a well-known guitar teacher, then graduated to a sort of roadhouse jazz and blues mix, in the bands of drummer Bud Spangler and Jackson tenor man Benny Poole, and various organ trios, including his long time employer and collaborator Lyman Woodard. Along the way, for his friends, Bob Baldori and the Woolies, Ron contributed the guitar solo on a classic blues rock “nugget,” the Woolies’ 1967 cover of Bo Diddly’s Who Do You love?

In the 70s, Ron played with some of the later expanded editions of the CJQ, led by Charles Moore and pianist Kenny Cox, exploring more post-bop and avant-garde paths. He participated in the artistic self-determination efforts of the 70s with the Tribe and Strata organizations, producing concerts and records. Ron was featured on a couple Strata releases, CJQ’s Locations and Lyman Woodard’s Saturday Night Special.

From the 70s on into the 90s, Ron toured and recorded with Michigan jazz artists Lyman Woodard, Phil Ranelin, Wendell Harrison, Kenny Cox, the Jimmy Wilkins Orchestra, the Austin-Moro Big Band, and Eddie Russ, with whom he toured Europe.

He also toured backing the Four Tops, Martha Reeves & the Vandellas, and the Supremes’ Mary Wilson, and recorded with Gladys Knight and the Pips. He made much of his living for a number of years in the pit orchestras for the Fisher Theater and others, backing Broadway musicals and pop acts, and occasionally with the Detroit Symphony Orchestra. He played banjo on the DSO’s recording of Gershwin’s Porgy and Bess suite.

Ron led his own jazz groups in the greater Detroit area, starting when his quartet played every Thursday night at Cobb’s Corner for about two years in the late 70s. Ron’s groups opened concerts for Freddie Hubbard, McCoy Tyner, the Jazz Crusaders, and others, and appeared frequently in Detroit’s Labor Day jazz festival at Hart Plaza. His 1988 LP From Now to Then was drawn from live concerts at the Detroit Institute of Arts.

In the 80s, Ron reunited with bassist John Dana, who had left Detroit in 1971 for New York, where he worked with Art Blakey, Blood Ulmer, Kenny Dorham and Rashied Ali. Back in Detroit, John played with Ron in a number of contexts, often as a duo. Both underwent a life changing religious conversion, and began attending Rosedale Park Baptist Church, where they applied their musical skills in worship. Drummer Gerald Cleaver was at that time a member of the same church, and the three began playing together as the Psalm 150 Ensemble, occasionally augmented with guest musicians. From 1992 to 2000, Ron was Minister of Music at Rosedale, and he continues on staff.

In addition to his Psalm 150 Ensemble work, Ron plays jazz in restaurants, clubs and concerts. Ron also is a member of Vincent York’s “Jazzistry,” a live jazz history concert presentation for school and community groups since about 1995, as well as M.L. Liebler’s Magic Poetry Band since 2005. 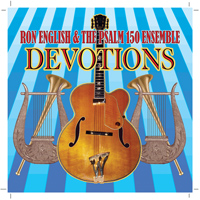 All About Jazz musician pages are maintained by musicians, publicists and trusted members like you. Interested? Tell us why you would like to improve the Ron English musician page.