Scot Ray's eclectic slide guitar work is informed by his many years as a professional trombonist - from work with Brian Setzer of the Stray Cats (which involved collaborations with Gwen Stefani, Tony Bennett, and Bob Dylan; along with a Grammy), to pop icons Jason Mraz, Dionne Warwick, Elliot Easton (of The Cars) & Ray Manzarek (of The Doors); from Cuban percussionist Francisco Aguabella to new music pioneers Steuart Liebig, Alex Cline, Vinny Golia, Bill Barrett, Nels Cline; from Caribbean cruise ships and Buddhist funeral bands to performances on David Byrne's Sessions At W. 54th Street, David Letterman, Jay Leno, Conan O'Brien, The DuMaurier Jazz Festival, and Harmonica Sur Cher France; from soundtracks 'Stuart Little', 'Me, Myself, and Irene', and 'Three To Tango', to a vote as 'rising star' from Down Beat Magazine. Ray currently homesteads in a small mountain town with intermittent excursions to wield his slide guitars in a variety of odd and captivatingly obscure projects including Gutpuppet, Drift & Throttle, Roughnecks, Tee-tot Quartet, and Super8sonic film improvisations.

“Prepare to be slain by his slide-guitar grind...capable of both the downest of Delta slidations and the noisiest of apocalyptic disruptions.” - Metaljazz, Los Angeles

“Scot Ray is a sensible master of the objective sliding truth and I wouldn’t hesitate to compare him to players on the same level of Ry Cooder and Sonny Landreth. He’s a diversified velvet-touch fingerstylist whose evolved phrasing fuses past and future seamlessly, a true joy to hear - and not only for guitarists.” - Touching Extremes, Italy

“Ray generates a kaleidoscopic array of sound with his amplified dobro; from languid slides to fragmentary picking, his instrument's resonator hums with ghostly blues inflection one minute, scintillating crystalline shards the next.” - Troy Collins, All About Jazz 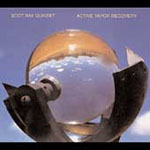 All About Jazz musician pages are maintained by musicians, publicists and trusted members like you. Interested? Tell us why you would like to improve the Scot Ray musician page.