A soulful urban expression, creating one of the most cutting edge urban contemporary jazz albums for the year 2006 ; a combination of sexy jazz violin over smooth urban and hip-hop beats.

Noel has thousands of fans who knew him as a Principle actor on the television soap opera General Hospital, a recurring character on Mad About You, and a co-star on FBI, The Untold Stores. He was a star of many films and Movies of the Week including The Alamo, Young Riders, The Menendez Brothers, and Reluctant Agent, was featured on commercials by McDonalds, Honda, Emery, NBC Promo, a CBS Promo, and narrated more than 50 A&E Biographies, TNN Biographies, and movie trailers.

Noel Webb is an electric jazz/rock violinist and actor. He still remains the only smooth jazz violinist in the music market. His acting career mostly involves voice over acting for A&E Biographies and other venues. His film and TV credits include General Hospital, Mad About You, FBI, Untold Stories, The Alamo, The Menedez Bros., and dozens of television and radio commercials. 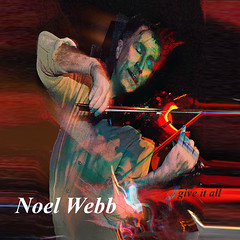 All About Jazz musician pages are maintained by musicians, publicists and trusted members like you. Interested? Tell us why you would like to improve the Noel Webb musician page.