Ned is the Musical Director for Enrico's Sidewalk Cafe in North Beach.

He has been featured as a performer and writer in Just Jazz Guitar and JazzNow! Magazine. His performances have been featured on KCSM Radio, KALW Radio and on channel 53 Musician's Showcase.

Ned Boynton guitar
In the blizzard of record promotion and the barrage of radio coverage it would be easy to overlook guitarist Ned Boynton's "North Beach Sound", but to do so would be your loss. It's a fine example of small-group, basically acoustic, jazz, with a repertoire of ballads and bebop, a blues and a bolero. Contributors include the legendary Mundell Lowe and the masterful Bruce Forman. It's always good to hear Jules Broussard, whose saxophone provides sonic variety; and the interactions between Ned, Jules and bassist Bing Nathan reveal the legacy of their regular gigs in North Beach. Michael Burman - KCSM-FM jazz Radio (Oct 20, 2006) 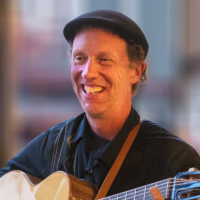 All About Jazz musician pages are maintained by musicians, publicists and trusted members like you. Interested? Tell us why you would like to improve the Ned Boynton musician page.