Born in Washington DC, Jerome Epps began to embrace music at a very young age. With his father being an accomplished jazz saxophonist, Jerome would listen to his dad practice for hours to the likes of Miles, Coltrane, Bird, Sergio Mendes, Antonio Carlos Jobim, and the virtual who's who of jazz. Yet there would take a slight detour on the path to fully appreciating jazz. And that detour was called: "Jimi Hendrix". The Jazz world was put on hold while performed in numerous rock bands influenced by Eric Clapton (Cream), Terry Kath (Chicago), Jimmy Page (Zepplin), and the original Santana band. Later his interests would shift back towards r&b, soul and funk, only to make the ultimate migration to more progressive jazz-rock fusion artists like Chick Corea, Al Dimeola, John McLaughlin's Mahavishnu Orchestra, and Weather Report. (Now heavily influenced by George Benson, Pat Metheny, Norman Brown, Chuck Loeb, Chris Botti, Herbie Hancock, George Duke, and many jazz funk artists.)

Oddly enough, as a youngster Jerome's first music teacher was Roberta Flack (of "Killing Me Softly" fame) who taught him within the D.C. public school system. Years later he studied Music Education at Howard University where he met Dizzy Gillespie at a Latin-Jazz seminar. A priceless experience indeed. 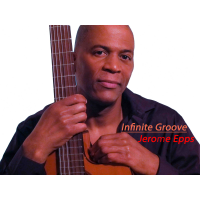 All About Jazz musician pages are maintained by musicians, publicists and trusted members like you. Interested? Tell us why you would like to improve the Jerome Epps musician page.