A professional musician for over fifty-five years, multi-instrumentalist Matt Finley is a native of Lake George, New York. He graduated from Union College, where he led a combined Union/SUNY Albany/RPI Jazz Workshop to a semi-final appearance at the American College Jazz Festival and received honorable mention in the New York Times. Matt earned his master's degree from the College of Saint Rose and is permanently certified to teach music in New York State. He performed for many years with Grammy-winning baritone saxophonist Nick Brignola and was a featured trumpet soloist and arranger with the Albany Jazz Workshop. Matt studied composition with Edgar Curtis, Director of the Albany Symphony Orchestra.

A life member of American Federation of Musicians Local 238, Matt is a retired professor of computer information systems and was academic dean at Dutchess Community College in Poughkeepsie, New York. For many years, Matt accomplished his goal of learning to play a new instrument every year to improve his composing and arranging abilities. Not only a multi-instrumentalist, he is in demand as a composer, arranger, sound engineer and recording sideman.

Matt's 2006 CD, "Brazilian Wish" on the Kingsmill Music label features original jazz sambas and bossa novas, played by some of the best musicians in the world!

Matt has performed with Nick Brignola, Joel Rosenblatt, Mark Egan, Bill O'Connell and many others.

"Execution is virtually flawless; he smokes on every tune" - Frank Villafane, VINILEMANIA.NET 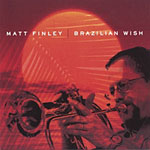 All About Jazz musician pages are maintained by musicians, publicists and trusted members like you. Interested? Tell us why you would like to improve the Matt Finley musician page.