MICHÉLE RAMO (pronounced: Me-KEL-ay) is an 8 string nylon fingerstyle jazz guitarist, jazz violinist, jazz mandolinist, composer and educator who specializes in bringing American Swing, Brazilian, Gypsy and Latin rhythms together in his playing, as well as composing and arranging for the guitar. A classical-jazz crossover artist in the truest sense of the word, Ramo has a unique and sought-after ability for blending his classical and jazz worlds into his writing, teaching and performance.

Ramo is a self-taught guitarist whose formal training and higher education is in violin studies. Ramo always maintained his guitar playing alongside the violin and while working in orchestras. He attended guitar master classes in Italy with Aliro Diaz, and in the United States with Carlos Barbosa-Lima, Charlie Byrd, Kenny Burrell, Joe Pass & Baden Powell.

RAMO born on May 5th, 1964, grew up in the small Sicilian village of ‘Costiera’, located on the southwest coast of Sicily near the fishing port of Mazara del Vallo.

He began violin studies at 13 and at the age of seventeen received his first professional contract with the Italian State Symphony opera orchestra “Orchestra Del Teatro Massimo in Palermo. He earned a Master's degree in violin from the music conservatory of Caltanissetta. Ramo toured Europe with the International Mediterranean Youth Orchestra �"“Le Juness Du Mediterranee”. In 1985 he was contracted with “Orchestra Sinfonica Siciliana” and worked as Concert Master with “Orchestra Filarmonica Del Tirrreno touring Italy.

After five years in various Italian State Orchestras, Ramo left the orchestra job and moved to the United States in 1987 to pursue his work as a composer and instrumentalist in Jazz.

Ramo has Recorded 15 Albums as Leader,

His new releases as composer/performer are:

"The Song Is You" - Tribute To Lawrence G. Williams (2008) Ramo on 8 String Guitar and Marcus Belgrave - Trumpet.

currently sold out and out of print:

Ramo and his group have been featured at concert events along with world renowned artists including Yo Yo Ma, James Galway, Ertha Kitt, Barbara Cook, James Levine and the Metropolitan Opera Orchestra.

Read more articles
“Michéle Ramo’s guitar playing is outstanding and he is a composer to be reckoned with!” ~ guitarist Charlie Byrd 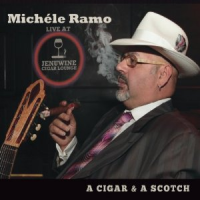 A Cigar & A Scotch

All About Jazz musician pages are maintained by musicians, publicists and trusted members like you. Interested? Tell us why you would like to improve the Michele Ramo musician page.