Artist/percussionist, composer, and educator Marcus L. Miller is a multi-talented artist based in Southern California. Since his arrival in CA in 1993, Miller has worked tirelessly in the music and education fields, carving out a unique niche for himself and his abilities.

Miller is bandleader of his World/Jazz ensemble Freedom Jazz Movement. Miller founded the group in 1998 and since then they have played throughout the East and West coasts of North America. Miller writes the music for the group and usually performs with his jazz sextet. The group's size ranges from a duo to a 12 piece ensemble including three percussionists, a three piece horn section, traps, bass, piano, vocals, poet, and dancer. Based in Los angeles, the group performs often with the Lula Washington Dance Theatre at various theatres throughout the United States and internationally.

Marcus’ workshops continue to be a success. In 2006, he traveled to the Caribbean and Mexico to work with counselors and children at several club Meds. Closer to home, Marcus has been a regular on the Southern CA public library scene. His drum workshop program, MarcusMillerDrums, has reached well over 200 libraries and schools.

In 2007, Marcus served as Artist in Residence at the CA African-American Museum (CAAM) for the Target Sundays program. He has worked with the Skirball Cultural Center & Museum, the LA County Museum of Art (LACMA), Kidspace museum, Museum of Contemporary Art (MOCA), and the Getty museum facilitating educational drum workshops and music programs.

Miller founded the Young Drummers of Los Angeles in 1999. This group is comprised of young boys ages 8-16. Many of the drummers were Miller's private students whom he noticed had considerable talent, but no place to showcase it. In his role as the Artistic Director, Miller states he started the group so that the kids could have a place to perform in order to gain the invaluable experience of performing live on stage and have an alternative to gangs, drugs, and other potentially ganderous activities. The group has performed for events involving two mayors of Los Angeles, participated in festivals and parades, and performed in theatres with the Lula Washington Youth Dance ensemble. Presently Miller's 8 private students are the building blocks for the next generation of the Young Drummers of Los Angeles.

Since 2003, Marcus has been working steadfastly on a musical career that enables him to be a bandleader & composer, sit-in with other accomplished artists and musicians, entertain & educate thousands with his drum workshop program, regularly teach drum students in private lessons, and run his record label. Life is full, but fun! 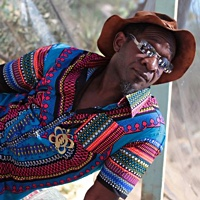 All About Jazz musician pages are maintained by musicians, publicists and trusted members like you. Interested? Tell us why you would like to improve the Marcus L. Miller musician page.