Louie Cruz Beltran has crafted a musical career built upon the soulful sounds of his ethnic background and flavored with the edge of contemporary R&B, Jazz and Pop. Steeped in music from early childhood, Beltran's first memories recall his mother singing gospel and Mexican folk tunes.

“My mother was always singing and liked to play piano. There was always music in the house. She loved to sing everything from church hymns to Benny Goodman hits, but to me Mom always sounded prettiest in Spanish.”

By the time he reached the third grade, Beltran was experimenting with rhythms on the bongos and learning to play the guitar. In high school he joined The Sadistic Velvet Blues, a self-proclaimed hippie band following the influences of The Rolling Stones and Iron Butterfly.

However, it was the early recordings of artists such as Ray Barretto, Mongo Santa Maria and Perez Prado that sparked Louie's interest. Captivated by the Afro-Cuban beat he chose to pursue the art of percussion, specializing in the congas and timbales. “The beauty of Afro-Cuban music stole my heart,” Beltran said, “I was born to play congas. I am a rumbero.”

An active participant in political demonstrations led by Caesar Chavez, Beltran met his first true conga teacher at a UFW strike. Puerto Rican born Jorge Claudio introduced Louie to fundamental rhythms, such as the Tumbao, and the rhythms of Puerto Rico and Cuba. “Jorge's teaching was an unselfish gift. He will be my friend forever.

“Later, during a trip to the Bay Area, Louie had the honor of meeting the legendary Coke Escovedo who was impressed by Beltran's enthusiasm and talent. Escovedo became Beltran's first professional mentor, inviting the young musician to perform with him on a number of occasions and encouraging him to pursue his goals. “Coke's impact on my life is simply indescribable. His encouragement was instrumental in my decision to become a professional musician. His spirit remains with me siempre por vida.

“Years later fate would re-connect Beltran to the Escovedo family when he met and performed with Coke's brother, Pete Escovedo, at a memorial benefit for a mutual friend. Since then, Louie and Pete have shared the stage on a number of occasions and developed a deep respect for one another.

In 1978 Beltran joined the group Starrfire and toured throughout The United States, Europe, Scandinavia, the Middle East, and Africa. He recalls his first tour as being both intensely educational and satisfying. While touring France, Louie had the opportunity to study at the Conservatory of Percussion in Paris.

Upon returning to the States in 1979, Beltran became the studio percussionist for The Sylvers. With them, he recorded such hits as “Boogie Fever” and “Hot Line”. He then joined the group on their tour of Southern California that same year.

During the early 1980's Beltran expanded his resume to include acting. He worked in theater with Luis Valdez in a production entitled Corridos, and then with the Bilingual Foundation of the Arts with Carmen Zapata and Henry Darrow. He also appeared in movies including a Lucasfilm, and in the television series Scarecrow and Mrs. King. He starred in a video documentary directed by Jose Luiz Valenzuela entitled La Redada, produced by MALDEF.

Throughout this time, Beltran continued to work as a musician, lending his talents to the Hollywood industry in the form of musical sound tracts and arrangements for both films and television ad campaigns. Then, in 1984, he had the opportunity to tour Nicaragua with Luis Godoy Mejia and Mancotal, the renowned Nuevo Canto Salsa group. Traveling throughout a country in the throes of such deep political turmoil had a deep impact on Beltran, “My experience with the people of Nicaragua humbled me. It caused me to re-evaluate my commitment to my musical career. To play with Luis Godoy Mejia at that time and in that place was a great honor for me.” Indeed, Beltran soon realized that his passion for music proved much stronger than his desire to act and he returned to pursuing his musical career full time.

In 1987 Beltran worked as the studio percussionist for international entertainer Ray Camacho. The satirical title song on the album they recorded, “La Ruca No Era Ruca”, topped the Spanish Music charts and remained in the number one spot for sixteen weeks.

In 1990, Louie Cruz Beltran was honored with the placement of his composition “Pan Con Dignidad (Bread With Dignity)” in the compilation series “Who's Who of Composers” published by Plaza de la Raza of Los Angeles. This honor was later chronicled in Steven Loza's book, “Barrio Rhythms: Mexican-American Music”.

In 1992 Louie toured the southwest United States with the reggae band O.P. Stylee. An intense tour during which the group opened for bands such as Steel Pulse, Third World, Aswad, Eek-A-Mouse and Edgar Winter, Louie recalls, “It was a challenge working with a band which performed all original material.” A challenge, yes, but one Beltran seems to have been well suited for; he wrote two of his most requested dance songs, “The Ring” and “Cha Cha California” during this tour.

In 1993 Beltran worked as a studio percussionist for an Atlantic records project, recording with Laura and Paul Satterfield, Monty Byrom and Rita Coolidge. That same year Beltran began his long-standing position as bandleader at Cheney's Nightclub. He has had the opportunity to welcome artists such as Pete Escovedo, Brenton Wood, Bob Harris and Billy Haynes to join him onstage.

In December of 1999 Louie was asked to perform for Cuban dignitary Dr. Ariel Aguilar Reyes from the University of Havana. Dr. Reyes' warm reception of Beltran's music, and indeed the invitation he has subsequently extended for Louie to perform an instructional/cultural tour of Cuba, offers glowing testimony to the dynamic level of the music that Beltran began crafting more than three decades ago. Show less 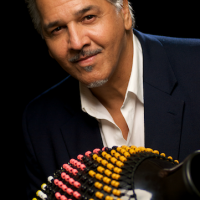 All About Jazz musician pages are maintained by musicians, publicists and trusted members like you. Interested? Tell us why you would like to improve the Louie Cruz Beltran musician page.