Lluc Casares (1990). Devoted to music since a very early age, Lluc grew up surrounded by the sounds of Sonny Stitt and Louis Armstrong, but also the Afro-Cuban All-Stars and Earth, Wind and Fire to just name a few. His father, Pau Casares, was his very first clarinet teacher and mentor. Nowadays, Lluc lives in New York City being part of the prestigious Artist Diploma Ensemble at the Juilliard School of Music. Through his career, he has performed with Dr. John, Nicholas Payton, Frank Wess, Phil Woods, Lee Konitz, Jon Faddis, Jesse Davis, Arturo Sandoval, Wendell Brunious, Grant Stewart, Perico Sambeat, Ben Van Gelder, Joris Roelofs or Benjamin Herman among others.

Lluc got his Bachelor’s degree at ESMUC (Escola Superior de Música de Catalunya) and his Masters at CvA (Conservatorium Van Amsterdam) studying with the local legend Ferdinand Povel and having the chance to spend one semester at Temple University (Philadelphia) with Dick Oatts.

He has recorded more than 20 albums as a sideman and his first as a leader, RED (Temps Records, 2015), made possible for him to play under his name at the most important venues in Amsterdam and Barcelona. His second album, Sketches Overseas (Outside In Music, 2018), features Joel Ross, Philip Dizack, Addison Frei, Mark Lewandowski, Francesco Ciniglio and is coming out this fall. Lluc also performed in major jazz festivals around Europe like the North Sea Jazz Festival, Montreux Jazz Festival, Marciac Jazz Festival, Jazz Middelhein, Baloise Session, and Festival de Jazz de Terrassa among others.

Within the education field, Lluc taught at the CSMIB (Conservatori Superior de Música de les Illes Balears) in Palma de Mallorca from 2015 till 2017 and at the Torino Conservatory and several international schools in Shanghai with the Juilliard AD Ensemble. Lluc also conducted successfully his very first Summer Jazz Workshop in Barcelona in 2018. He’s also a D’Addario artist using its reeds, mouthpieces and ligatures among other accessories. Show less 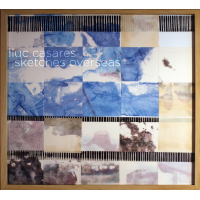 All About Jazz musician pages are maintained by musicians, publicists and trusted members like you. Interested? Tell us why you would like to improve the Lluc Casares musician page.