Harmonica wizard and entrepreneur Lee Oskar was born in Copenhagen, Denmark in 1948. Oskar landed in the States in the mid 60’s and is most popularly known as one of the founding members of the seminal jam band WAR. Together with Harold Brown, BB Dickerson, Howard Scott, Lonie Jordan, Charles Miller, and “Papa Dee” Allen, WAR started out supporting the former Animal front man, Eric Burdon. Together with Burdon, their very first recorded effort contained the popular tune “Spill The Wine,” unleashing the genre-busting sound of WAR for the first time.

Not far down the road the group set out on their own to compose and perform huge hits like, “All Day Music,” “City Country City,” “Me and Baby Brother,” “Low Rider,” “Why Can’t We Be Friends,” “The Cisco Kid,” “Slipping into Darkness,” “The World is a Ghetto,” and many others.

Today, the musical legacy of WAR continues as Lee and original members Howard Scott (guitar/vocal) BB Dickerson (bass/vocal) and Harold Brown (drums/vocal) continue to perform and collaborate as The Lowrider Band. The Lowrider Band has been performing around the country, jamming the classic hits they composed and promoting the new name to get the public ready for new music to come from the heart of the classic line-up.

Lee’s own compositions began to get more attention when his first solo album won Billboard’s Best Instrumental Album of the year in 1976. This was followed by several other releases, most notably, “Before the Rain” and “My Road, Our Road.” His compositions and recordings have always been noted for their great melodies, and unique (some would say unparalleled) harmonica performances.

Driven by his unique style and demand for quality, Lee set out to make a better instrument and decided to partner with Tombo of Japan, one of the oldest and most respected harmonica manufacturers in the world. With Lee’s pioneering ideas and Tombo’s uncompromising manufacturing process, the Lee Oskar Harmonica was born in 1983. Lee has not only been able to enjoy playing the kind of quality instrument he wished he had in the early days, but has made a fantastic instrument available to discerning players around the world.

After enjoying musical and business successes, Lee found a unique niche in the early days of the mobile content business. As one of the very first to produce character-based voice ringtones, Lee Oskar Productions’ ringtones have enjoyed wide appeal and distribution through major carriers like Sprint, Verizon and T-Mobile, and independent outlets like Jamster. Adding to this unique catalog of mobile content continues as one of Lee Oskar Productions’ primary tasks.

Composing and playing music remain Oskar's top career priority and he looks forward to many new projects that are in the works. Lee Oskar has just released a compilation of his favorite original compositions which is now in distribution. Show less 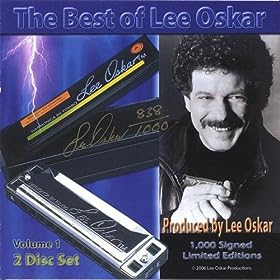 The Best of Lee Oskar

The Best Of Lee Oskar

Live At The Pitt Inn

My Road Our Road

All About Jazz musician pages are maintained by musicians, publicists and trusted members like you. Interested? Tell us why you would like to improve the Paul Butterfield musician page.