Larry Garner was comfortable in the 9-to-5 routine of commuting to his day job, and making a good salary working for Dow Chemical. On his drive home one night, he was forced to take an alternate route. “There was an accident on the interstate, and I took a detour to avoid it,” remembers Garner. “I drove by this place that had a sign outside on wheels, with a couple lights that said, ‘Blues Jam Tonight.’ I went in, and they said to be back at 10 that night. I went home and told my wife about it. She said, ‘You know you’ve got to go to work tomorrow.’ I went anyway, played, and got home at 2:30 in the morning. That was Tabby’s Blues Box.”

The scene at the legendary Baton Rouge blues hotbed was a marked contrast to the occasional weekend gigs Garner was playing at the time. It was the early 1970s, and Garner had just returned from an 3 year tour in the army. “There were no gigs,” he remembers. “It was all disco. There were occasionally American Legion gigs or weddings or rent parties. I played in my garage. I took a job with Dow Chemical, and I rarely played in public.”

Garner started moonlighting for the first few years he played out at Tabby’s Blues Box. He met such Baton Rouge bluesmen as Silas Hogan, Whispering Smith, Arthur Kelly and Raful Neal. He occasionally played in New Orleans at Rhythms on Bourbon Street, or with Bryan Lee at the late, lamented Old Absinthe Bar. But eventually he couldn’t keep burning the candle at both ends. He recalls hanging out at Tabby’s one night with Kenny Neal, who’d just finished touring. When Neal pleaded with him to stick around for another drink instead of getting ready for work in the morning, Garner tried to explain. “He said, ‘You got to quit that job.’ I said, ‘I know, but I still got to go to work in the morning.’ I left, but Kenny saying that stuck in my head. I had to quit.”

It was a chance for Garner to play the music he’d loved since his early childhood. Growing up near Baton Rouge in the small town of Oaknolia, Garner heard the music coming from the church near his house. “There were traveling preachers coming through, and I heard that, and I listened to WLAC in Nashville on Friday and Saturday night,” he say. “I started playing guitar because I had an uncle, George, who taught me. He was a paraplegic, and he played like Jimmy Reed. I learned through him, and started playing at the church and behind a gospel group that played on the radio.

“My parents didn’t want me playing the blues,” Garner continues. “They thought it was the devil’s music ��” then I guess the juke joint a quarter-mile down the road was the devil’s recruitment office. I never went into the juke except during the day, when it was a store.”

Garner continued playing music during his military service, and playing in army bands ��” while stationed in Korea ��” steeled him for the life of a full-time musician. Leaving Dow Chemical was initially tough for him, but now he has a devoted following throughout the country and across the Atlantic Ocean. “I’m on tour all the time,” he says. “I go to Europe and England a few times a year. Over there they really like my original stuff. They hear guys playing the blues, but when I come in, they come right up and say, ‘Thank God ��” a real blues band.’ We take it for granted here. They’re really appreciative there, and so am I.

Larry Garner is to Perform at Abu Dhabi Jazz Festival 2008 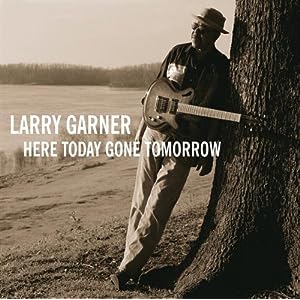 All About Jazz musician pages are maintained by musicians, publicists and trusted members like you. Interested? Tell us why you would like to improve the Larry Garner musician page.