Lightbulb moments can strike at any time. Eclectic virtuosic clarinetist Kristen Mather de Andrade had reached a career milestone in being years into a full-time prestigious position with the West Point Band when she had a seismic artistic epiphany. After playing a program of Brazilian music on a livestream, she decided it was time to record her full-length debut album, aptly-titled Clarão which translates from Portuguese to mean “flash of light.”

The New York-based artist’s career has been defined by immersing herself in a broad array of musical worlds and cultures, from the classical canon to world music, and beyond. The music traditions explored on Clarão, however, hold a special place in her heart as her husband is from Brazil, and previously she had been a lifelong admirer of the country’s musical exports. Clarão is a treat for Brazilian music aficionados and casual music fans who desire a sonic experience that whisks you away to a sweetly tropical escape. The album features an exhilarating melding of American big band traditions with authentic Brazilian rhythms. Its repertoire of songs pays homage to unsung Brazilian composers such as Severino Araújo, Roque Ferreira, and Rubens Leal Brito, among others. The album boasts the production, arrangement smarts, and masterful pandeiro playing of Sergio Krakowski.

Kristen’s breezy vocals and her soulfully dexterous clarinet playing are a joy throughout Clarão. On “Côco tara ta ta,” a track written by the hidden gem of a composer Severino Araújo, sinewy Brazilian grooves mesh majestically with a big band instrumental topline. Kristen’s sensually expressive vocals shine on her breezy rendition of Northeast Brazilian singer-composer’s Roque Ferreira “Guelê Guelê.” The song’s evocative lyrics are poetically reflected in the track’s imaginative arrangement which mirrors the vastness of the sea by having no hard and fast beginning or ending. On the slinky instrumental, “Chorinho para ele,” Kristen’s virtuosic classical musicality is in full bloom.

Kristen’s career has been defined by her ability to bring to life a bevy of musical lineages. Meeting her husband in 2011 brought her closer to the Brazilian music tradition, after which she decided to learn Portuguese by ear. Her innate feel for the music and its culture peaked with a Facebook livestream event in which Kristen performed a Brazilian repertoire to a Brazilian audience. Here, her song selection showed a reverence for the tradition in that it favored lesser known composers and instrumentalists. Her careful attention to performing the music accurately and her soulful spirit moved the Brazilian audience. Her performance was written up in the Brazilian Global News. This was the glimmer of inspiration that led to Clarão.

Kristen grew up in Youngstown, Ohio, a small rust-belt city with a wealth of culture to soak in. With music in her home, and a lot of cultural experiences for a motivated young musician in the area, it was almost inevitable Kristen would find her way into music. She first explored singing and piano before becoming enraptured with the clarinet while in middle school band. At just 10 years of age, she practiced 3 to 4 hours a day. Her determination, inborn talent, and passion for music led her to many classical recital and competitions triumphs, and earned her opportunities to perform with many regional symphonies.

She went on to earn a Bachelor of Music in clarinet performance from Youngstown State University where she won many awards and scholarships. She received a talent scholarship from DePaul University in Chicago, where, for a brief period of time, Kristen pursued a Master of Music in clarinet performance and studied with Larry Combs. Her time at DePaul was cut short by being offered her current position with the West Point Band. Since 2007, Kristen has been with West Point's Army special band and has been the principal clarinetist and soloist since 2012. Additionally, Kristen is the clarinetist, co-founder and artistic director of Vent Nouveau, the New York City-area ensemble that performs and records exciting material for winds and brass, as well as the mixed instrumentation group, Quintette 7 which recorded a full-length CD featuring music by the composer Raymond Scott.

After years of being a closeted singer, Kristen made her vocal debut on the NPR game show Says You! during its 2006 tour singing, “My Foolish Heart, Take the A Train,” and “You Belong to Me.” Since this transformative performance, Kristen has brought her voice to various projects along with her clarinet playing.

Career highlights thus far include performing at both well-known venues and unconventional performance spaces and events, including Avery Fisher Hall, Carnegie Hall, The Kennedy Center, Severance Hall, the New York City studio for [email protected], and the concert barge Point Counterpoint II on the Ohio River with the American Wind Symphony. Kristen has also performed in countless school auditoriums throughout the country, veteran’s homes, and has taken her varied skill set into three prisons as part of Grace Notes outreach. She says: “I’m interested in sharing my music with many communities. I see learning a language or a musical style as a kind of outreach. It is a way to break down barriers.”

Along the way, Kristen started teaching music in college, and eventually earned a Master of Arts in education at Columbia University in 2016. To date, Kristen has an impressive teaching resume that includes a private studio of high-achieving high school students, master classes, and professional clinics at institutions such as Columbia University Teachers College, Bard College, Montclair University, Westchester Conservatory of Music, University of Kentucky, Cincinnati Conservatory of Music, Indiana University at Bloomington, Kent State University, and others.

Presently, she is on faculty at Manhattanville College teaching clarinet, and saxophone. Kristen has enjoyed a career of prime accolades and acclaim within her chosen musical paths, but these days music feels as vital as ever as she explores being a solo artist. This fresh outlet of releasing her own recorded music has been transformative, and Kristen is already preparing for her sophomore album. This upcoming project will feature duo performances of through-composed music from around the world. In summation, one can definitely say her future path has truly been lit by Clarão. Show less

Kristen Mather de Andrade Clarinet Jazz Singer World Music Brazilian Music
“Lovers of classical music are always searching for that special moment when something miraculous occurs... Just such a moment occurred when Kristen Mather de Andrade... set down her instrument and began to sing, in Portuguese, a Brazilian ballad called “Luar do Sertão.” In this elegiac song, a homesick rustic tells city dwellers that they have never seen a beautiful moon because they have never seen it shining down on a pitch-black night in the countryside. The room fell silent when she began singing. Time stopped. Everyone in the room knew that something extraordinary was happening

“Lovers of classical music are always searching for that special moment when something miraculous occurs... Just such a moment occurred when Kristen Mather de Andrade... set down her instrument and began to sing, in Portuguese, a Brazilian ballad called “Luar do Sertão.” In this elegiac song, a homesick rustic tells city dwellers that they have never seen a beautiful moon because they have never seen it shining down on a pitch-black night in the countryside. The room fell silent when she began singing. Time stopped. Everyone in the room knew that something extraordinary was happening. ” - Joe Queenan, Rotary Magazine

“...Côco Tara Tá Tá is beautifully done, and a treat to the ears. Beginning with a beautiful clarinet feature by Kristen, this song is upbeat and is sure to lighten the mood of any listener. A mostly instrumental track, it showcases each instrument beautifully without ever feeling overwhelming. A joyful group vocal repeating the songs title leads us out, interwoven with enticing clarinet melodies displaying Kristen's mastery of the instrument.” - Jeremy Davis, ethnocloud

“There is definitely that sense of spirituality in “Sagrado” when Kristen is singing it. This song is very relaxing and beautifully composed that truly showcases Kristen’s talent as both a singer and a clarinetist. Her love for Brazil is evident in her music and her passion for sharing that music with the rest of the world is unbelievably remarkable. If you don’t speak or understand Portuguese, that should not stop you from listening to Kristen’s beautiful works of art. “Sagrado” is an escape from reality and to a tropical island with no worries or responsibilities. We cannot wait to hear more from Kristen.” - Emily Hinde, The Indie Source 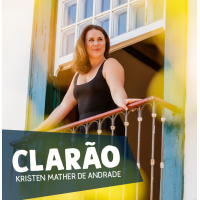 All About Jazz musician pages are maintained by musicians, publicists and trusted members like you. Interested? Tell us why you would like to improve the Kristen Mather de Andrade musician page.