Never compromising a strong dedication to excellence, critically-acclaimed artist, producer, educator, and entrepreneur Dr. Keith Javors has seen success in nearly every facet of the modern music industry. From his unmatched multiple, consecutive Downbeat magazine awards as a teacher and bandleader to the cutting edge leadership behind his global imprint Inarhyme Records to his natural aptitudes as a profound and soulful player and composer, Javors does it all, and he does it all at an undisputed high level. Not by his own admittance, Jazz Times says "The degree of hard work, patience, study, blood, sweat and tears necessary to produce a band of this quality is phenomenal."

Keith is President and CEO of Inarhyme Records LLC, a top-shelf Indie record label and music production company which produces critically-acclaimed and cutting-edge releases and produces concert collaborations throughout North America and abroad. The label has garnished consistent media praise by top periodicals ranging from Downbeat and Jazz Times to the Chicago Tribune for its high quality. Inarhyme’s releases feature such leading artists as the Hamburg Jazz Radio Orchestra, Tom Harrell, Boris Kozlov, Chris Potter, Terell Stafford, E.J. Strickland, Ben Williams, Steve Wilson, and many others. Described by alto saxophonist and Jazz Hall of Famer Bunky Green as a “creative force with an urgent message that cannot be denied”, Keith is a riveting player and live performer, particularly communicative in his ballad playing, transforming audiences and bands with his creativity and dynamic sensibilities. He can be heard on several emotive recordings as a leader: Mantra, From Here To The Street, Mo’ City Jungle, The Free Project, Coming Together, Rhyme and Reason, as well as On the Bright Side with the American Music Project which he co-leads. One jazz connoisseur in Moscow summed it up like this: “There are many musicians who play brilliantly from their head, but Keith is rare in that he comes straight from the heart.”

Dr. Javors is rare in the degree of his success not only as a producer and artist, but equally as a charismatic, award-winning music educator, speaker, and industry consultant. A distinguished graduate of the University of North Texas (B.M., M.M. Jazz Studies) and the first graduate of the University of Illinois Jazz Pedagogy program (Ed.D. Music Education/Jazz Studies), he has held successful teaching positions at UNT, UIUC, Eastern Illinois University, the University of North Florida, and Settlement Music School. His past students have won Grammys, occupy positions in major symphonies and jazz orchestras, lead as esteemed administrators and college professors, or are successful working professionals in a host of fields. A gifted diagnostician, Javors is highly-sought after as a guest artist and clinician for schools, groups, and organizations throughout the United States and abroad because of his ability to achieve real and instantaneous results. Jazz Review says “It takes a musician’s true artistic love and commitment to the art to really peer through his or her music to find this type of end.”

With several new CD releases scheduled through 2015, Keith continues to push the artistic envelope with surprising and refreshing results. New York City Jazz Journalist Russ Musto (AllAboutJazz) probably said it best: “Keith is one who certainly can and does, traveling a high road that steers clear of the Ivory Towers and chooses instead more interesting places.” Show less

Oleg Kireyev and Keith Javors at the Smalls Jazz Club (NYC) on...

Artists Oleg Kireyev and Keith Javors at the Iridium Jazz Club (NYC) on...

On the Bright Side 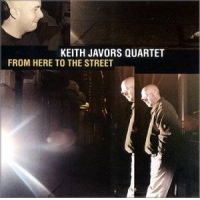 All About Jazz musician pages are maintained by musicians, publicists and trusted members like you. Interested? Tell us why you would like to improve the Keith Javors musician page.