Julieta was borned in Necochea (Buenos Aires) where she began studying music under the direction of Juan Carlos Gesualdi. She started with piano and then moved to saxophone and clarinet.

In 2008, she started her journey to the big city, Buenos Aires, to continue her musical studies at Carrera Superior de Jazz del Conservatorio Manuel de Falla, Conservatorio Nacional Lopez Buchardo ( IUNA) and some private lessons too.

​Julieta embeded herself into the Argentinian jazz scene and performed in renowed jazz venues in Buenos Aires alongside master musicians.

Julieta was accepted to study at Queens College for a Jazz Master degree in New York city.

​Recentley Julieta had the opportunity to perform on one of the most prestigious jazz broadcast radios in the US - WBGO. As well as being featured on a piece on ABC7 News nationwide alongside Master Philip Harper.

​In April 2017, Julieta Eugenio won the International Women in Jazz Competition as a member of the SIJ trio and will perform at the Saint Peter's Church for the IWJ Festival in NYC. 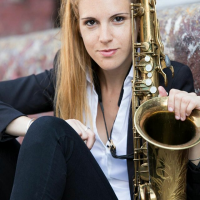 All About Jazz musician pages are maintained by musicians, publicists and trusted members like you. Interested? Tell us why you would like to improve the Julieta Eugenio musician page.