Joan Hutton is a woodwind performer, composer and music educator residing in Minneapolis and hailing from Toronto, Canada. After many years performing primarily in the classical genre, with the Ancia Saxophone Quartet and as a freelance doubler, in 2017 she began devoting her energy to jazz and improvised music. Since then, Joan has developed her voice on bass clarinet in addition to saxophones and formed the Joan Hutton Jazz Project to feature her original compositions. She has become a regular on the Twin Cities jazz scene and has performed with the Joan Hutton Jazz Project at the Twin Cities Jazz Festival.

In 2019 Joan and tenor saxophonist Sue Orfield began collaborating on a series of YouTube videos featuring their original music and appearances from their favorite area musicians, which led to the formation of their quintet, Take That Back. The group went into the studio summer of 2021 to record their first album, which was released on Shifting Paradigm Records in January 2022.

From: Take That Back
By Joan Hutton 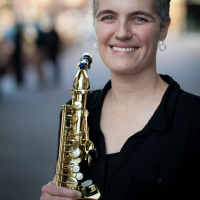 All About Jazz musician pages are maintained by musicians, publicists and trusted members like you. Interested? Tell us why you would like to improve the Joan Hutton musician page.