Ellis Larkins' elegant piano playing was once described as a rainbow of interwoven musical textures. He created an intimate palette of sound which brought out the best in his partners �” Ella Fitzgerald, Coleman Hawkins, Joe Pass and Ruby Braff among them. Braff, who recorded with Larkins in the 1950s, recalled, “[His] playing was so beautiful �” a complete orchestra by itself.”

Yet Larkins was also an understated and unselfish performer. He rarely, if ever, sought the spotlight. He stressed the importance of musical patience, and of adhering to a song's melody.

Ellis Lane Larkins was born in Baltimore, Md., on May 15, 1923. Both of his parents were classical musicians. His father, a violinist, started his son on piano lessons at the age of 4. Larkins practiced for two hours each day and progressed quickly, eventually joining his father in performances with a local black orchestra.

Larkins was the first black student admitted to Baltimore's prestigious Peabody Conservatory of Music, and went from there to the Juilliard School of Music in New York City. To meet expenses, he began playing evening studio sessions, drawing on his classical technique to play jazz and popular music.

Soon, Larkins became a prominent fixture on the Manhattan nightclub scene, playing regularly at Cafe Society, the Blue Angel and the Village Vanguard. His solo performances at the Carnegie Tavern, below Carnegie Hall, became a New York institution. Sometimes, Larkins led a trio, but most often he accompanied singers, including Herb Jeffries, Joe Williams, Anita Ellis and Mildred Bailey.

Larkins is best remembered for his remarkable recordings with singer Ella Fitzgerald. Her 1950 album “Ella Sings Gershwin” features Larkins as the sole accompanist. When he was approached to work with Fitzgerald, Larkins said he strongly believed that piano accompaniment alone would best serve the singer's extraordinary talents. Larkins also made acclaimed duo recordings with trumpeter Ruby Braff and guitarist Joe Pass.

Still, Larkins' most remarkable affinity was for singers, and he served as a vocal coach and accompanist for Helen Humes and Joe Williams. Larkins was also a teacher and mentor to younger performers.

“I know that he influenced a lot of folks,” fellow pianist and educator Dr. Billy Taylor says. “I can hear it in their work.” The late Joe Williams summed up Larkins' contribution this way: “His gift is everything he's done.” 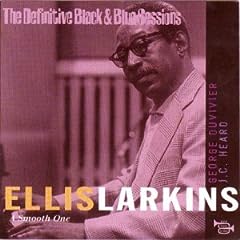 All About Jazz musician pages are maintained by musicians, publicists and trusted members like you. Interested? Tell us why you would like to improve the Ellis Larkins musician page.