“Elaine has a significant voice that commands attention, whether she's singing a ballad, a blues tune or plain old R & B” “Elaine's style makes for a great connection between audiences and the music. She almost never stops smiling—and better, it's joy and you know it.” “A beautiful woman who can sing *anything*...” "What a beautiful, expressive voice!" "Elaine, your sultry sounds are wonderful and mesmerizing"

Elaine Skeffington is an experienced vocalist who sings from the heart, covering everything from soulful to sultry. Performing in several Seattle-area bands, Elaine is also available as a soloist for special events & other occasions.

Since before she could speak, Elaine has been expressing herself through sound and music. From love to heartbreak to outright joy, performance has always been the language of choice not only to convey but to share these experiences with audiences.

"That kid" who just had to appear in every school production from kindergarten through graduation, Elaine first took to dance at the age of 3 1/2 (ballet/pointe, jazz, modern) and later pursued drama training, attending classes and several in-depth summer workshops, including Kelsey Theater's (NJ) long-running Tomato Patch Visual and Performing Arts Workshop. While studying ballet and jazz for 10 years, it became apparent to her that the music was as compelling as the movement. Piano lessons were first replaced by 6 years of flute, and finally gave way to a focus on vocals.

After majoring in voice/music education her first year of college (studying voice with George Massey at the Esther Boyer College of Music), Elaine was temporarily distracted by Developmental Psychology and graduate school, a cross-country move, and the joys of motherhood. Relocated on the West Coast and reinvigorated in new surroundings, Elaine jumped back in to music, singing at first informally with friends & at open mics, throwing her hat in the ring & earning a semi-finalist slot on a locally televised vocal competition. She has over the years and continues to study with some of the Seattle-area's top voice teachers (Kelly Harland, Robert Lunte/The Vocalist Studio, Dr. Kari Ragan, Jordyn Day, Greta Matassa) to continuously refine her craft. All the while, her passion for music has continued to burn and she is back with renewed purpose and energy - just ask & she'll be happy to sing to you about it. 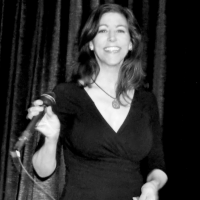 All About Jazz musician pages are maintained by musicians, publicists and trusted members like you. Interested? Tell us why you would like to improve the Elaine Skeffington musician page.