Born into a family of musicians from Upstate, New York, Calabria Foti (Cah-LAH-bree-ah FOE-tee) was completely immersed in music from the very beginning. Says Ms. Foti, "As a kid I was always around some kind of music. On any given day, I could hear my mother playing Chopin Etudes in one room, while in another room my father would be playing Bach Partitas on trombone, and on another day they would be playing American Songbook standards together, like Gershwin, or Porter or Berlin, or sometimes a song they wrote. It was a great way to grow up!"

Highly trained and gifted musicians, her parents passed on amazing intrinsic musical skills to their daughter (including an incredible memory and understanding of music after only one hearing) and their deep love for music and education. "We were always going to classical concerts and jazz clubs, so consequently, I got a great deal of exposure to both sides of the "musical tracks". I have been in love with all genres of music ever since." Calabria's first instruments were jazz guitar and bass. And because of her love for classical music, she also took up the violin and became very successful, including holding positions of concertmaster and associate concertmaster in several orchestras.

By age 12, in addition to playing several instruments and seriously studying the violin, Calabria was singing and performing in nightclubs and hotels with her musician parents and their colleagues. Her parents introduced her to the music of the vocalists who would become her biggest influences: Ella Fitzgerald, Peggy Lee, Frank Sinatra, Sammy Davis, Jr, and Judy Garland. Says Ms. Foti, "I absolutely loved those singers, and the songs they performed are just so well-crafted and wonderful, and those artists made those songs their own. When I sing, I want to connect with my audience on that same emotional level, as well as on many musical levels. The artists that we remember most were not only great singers, but great performers, and great entertainers because they made that connection with the audience and made them feel good."

Apparently, she learned her lessons well, as today’s music industry giants have praised Ms. Foti’s amazing vocal talent, and her unique way of making a connection with her audience. Legendary songwriter Johnny Mandel says, "Calabria is truly a marvelous singer in every way. She has all the technique and musicality you could want, and has the ability to tell a story and touch your heart." Sarah Vaughn's arranger, Sammy Nestico says, "Calabria is the complete artist - totally lyrical, adding her own fresh approach to every song." Over and over, critics remark how she draws out the “bare essence” of a lyric, just by singing the notes with unadorned sincerity, making her songs fresh and full-faced, as if each were important news. She brings emotion, intelligence and ultra-high standards to the music, and has that rare quality of “letting you in on the little secret she seems to be keeping.”

Calabria Foti is almost a kind of musical Renaissance Woman. In addition to her talents as a performer, she is also a gifted songwriter and vocal arranger. Her passion for music education has led her to coaching and conducting vocal and string ensembles of all performance levels in both jazz and classical music. Having a natural ability for teaching and a thoroughly engaging manner, she brings a wealth of knowledge and experience of both vocal and instrumental music into every educational setting. She is welcomed as a beloved guest artist to colleges and music camps across the US. Early in her career, Calabria gravitated to Los Angeles, becoming an in-demand violinist and vocalist in the recording studios. Her voice has been featured in motion pictures, including the recent, “Guess Who?” and her solo violin can be heard on the theme to the long-running PBS show, Great Performances.

Her latest CD, A Lovely Way To Spend An Evening released in October (2007), has received rave industry reviews. Says Ms, Foti, “I wanted to make a romantic jazz album that people could put on when they cuddled up with someone special, a record that would “put them in the mood!” The CD is a rich collection of lush ballads, edgy jazz and Broadway show tunes. Says Ms. Foti, "I love doing themes, and the theme of this record is a long evening of romance, from beginning to end." Legendary singer Johnny Mathis, The King of Romance Himself, says, "One of my greatest pleasures in life is listening to a beautiful voice. This recording of Calabria Foti's voice is some of the most beautiful and artistic music I have ever heard. Her heart and mind are on display in every well-chosen song. It is a treasure . . . what a joy." Saxophonist Dave Koz says, "Calabria's voice is gorgeous, the tracks with orchestra are stunning and the feel of the record is fantastic!” Trumpeter Chris Botti says, "Calabria is a gifted artist who puts her unique signature on each of these great standards", and producer/arranger Jorge Calandrelli says, "When I first heard Calabria, I felt I had discovered a hidden treasure."

Calabria, reflective of all the attention, adds, "I just feel so lucky to be able to sing and express my emotions through these wonderful songs. I'm so grateful that people still want to hear this great music and I love being able to perform it for them. There is nothing more I could ask for." Show less

"This recording of Calabria Foti's voice is some of the most beautiful and artistic music I have ever heard." - Johnny Mathis

"Calabria is a truly marvelous singer in every way. She has the ability to tell a story and touch your heart... one of the best CDs ever." - Johnny Mandel

"Calabria is a gifted artist who puts her unique signature on each of these great standards." - Chris Botti

"When I first heard Calabria, I thought I had discovered a hidden treasure." - Jorge Calandrelli

"Calabria's voice is gorgeous, the tracks with orchestra are stunning, and the feel of the record is fantastic!." - Dave Koz

"Calabria is the complete artist - totally lyrical, adding her own fresh approach to every song." - Sammy Nestico 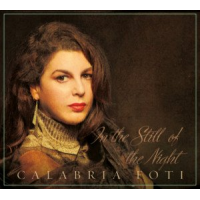 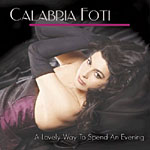 A Lovely Way To Spend...

From: In2uition
By Calabria Foti

All About Jazz musician pages are maintained by musicians, publicists and trusted members like you. Interested? Tell us why you would like to improve the Calabria Foti musician page.