Born in New Orleans, Powell is, perhaps, best known for his 12-year tenure (1951-63) with Count Basie, and for his eight-bar contribution to the Count's all-time big hit, "April in Paris." But more than that, Powell, in his all-too-rare solos with the Basie band, displayed a blues-laced, story-telling approach to improvisation. Check out, for instance, his masterfully balanced two-chorus statement on "Blues Backstage" from 1954, or "In a Mellotone," recorded in a live performance five years later.

After leaving Basie, Powell embarked upon a rich, diverse musical career. A versatile and accomplished player, he has worked extensively on Broadway, television, and on numerous recordings.

During the 1960s and '70s, Powell graced the trombone sections of Duke Pearson's fine New York big band and the renowned Thad Jones-Mel Lewis Jazz Orchestra. (His four-chorus solo on Jones'"Fingers" is a master class in modern jazz trombone improvisation.) He also began-and continues-to make his name as a leader in his own right, a respected teacher, and a dedicated activist in the cause of rights for jazz artists.

After a decade in Hollywood, where he worked on The Merv Griffin Show, Powell returned to New York in the early 1980s and connected with two visionary instrumentalist-composers, the late clarinetist John Carter and pianist Randy Weston, with whom he performed for over 30 years.

Although an unsuccessful kidney transplant in 1990 left him to undergo thrice weekly dialysis treatments until a second match was successfully transplanted in 1996, Powell never let it keep him from working-and even touring-with the likes of Weston, Benny Carter and Jimmy Heath among many others.

Benny Powell to Battle the Bones for Frankie Manning Birthday...

I am distressed when I hear about the passing of a musician, but this news was particularly poignant because Benny Powell was one of our treasured members. Benny Powell will be missed as much for his humanity as for his musicality.

Additionally, here are links to a few articles written about Benny by jazz writer Bob Bernotas:

I am distressed when I hear about the passing of a musician, but this news was particularly poignant because Benny Powell was one of our treasured members. Benny Powell will be missed as much for his humanity as for his musicality.

Additionally, here are links to a few articles written about Benny by jazz writer Bob Bernotas:

“Be assured [NEXTEP] is no trip down nostalgia lane. Overflowing with strong, original music, it is absolutely first class all the way.”

“He is a consummate professional and true trombone giant.”

“He’s still out there offering an abundance of music worth hearing...tinged by New Orleans, South African, Brazilian and Caribbean rhythms, the blues and bop..., and is clearly not slowing down.” 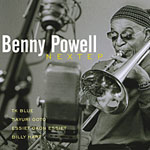 From: Nextep
By Benny Powell

All About Jazz musician pages are maintained by musicians, publicists and trusted members like you. Interested? Tell us why you would like to improve the Ben Markley musician page.