Annette Hanshaw whose career only lasted about 10 years was known as "The Personality Girl". Her short-lived recording career produced upwards to 250 sides. Annette was often confused for the voice of Betty Boop - singer Helen Kane. This petite, shy, introverted girl chose retirement over fame. It is said that she was more comfortable in the recording studio amongst the musicians than public appearances. Unlike most performers of the day, Annette never toured or performed on stage after becoming famous.

Catherine Annette Hanshaw was born at her parent's residence in Manhattan on October 18, 1901. She started singing in 1926 on local radio a couple of known times while visiting in Florida with her family prior to making her first recording. Her first commercial recordings "Black Bottom" and "Six Feet of Papa" were made in New York on September of the same year.

During 1928 she recorded under various pseudonyms Gay Ellis, Dot Dare, and Patsy Young, the latter two were used for Annette's Helen Kane (Betty Boop) impersonations. She began appearing on radio regularly in 1929.

By the early 1930’s, Henshaw was on the radio with Glen Grey's Casa Loma Orchestra. In 1932 starts a two-year run on "Captain Henry's Maxwell House Show Boat" on NBC Radio. The show was the biggest production ever conceived for radio. Annette plays the Helen Morgan part from the theatrical version of Jerome Kern and Oscar Hammerstein's “Show Boat.”

Her last recordings were on February 3, 1934. By 1937 she quits her singing career with her last song on "The Chevrolet Musical Moments Revue" radio program in December. She then chose to retire to become a housewife. Annette never really liked the show business life. Twice, in her much later life, she made private test records in comeback tries but was unsuccessful. 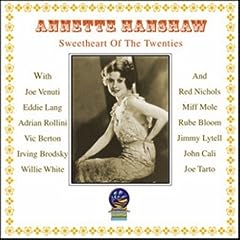 It Was So Beautiful

All About Jazz musician pages are maintained by musicians, publicists and trusted members like you. Interested? Tell us why you would like to improve the Annette Hanshaw musician page.