Jazz and popular music are overloaded with "overnight successes" who gain a great deal of attention when they burst upon the scene, only to slip away into obscurity within a short time. Amandah Jantzen is the complete opposite. Throughout her career she has gradually earned a strong reputation while mastering her craft. She is a singer who, once experienced, one never forgets.

Amandah has the rare ability to uplift standards and make vintage songs sound fresh, new and topical. Her warm voice and swinging style, combined with a large repertoire, result in consistently memorable performances. She is never shy to embrace melodies and lyrics from the Great American Songbook, bringing out the hidden beauty in both, but her renditions are never predictable. She is a jazz singer yet also quite accessible to a wide audience. Born and raised in the San Francisco Bay Area, Amandah was drawn to music from an early age. Although she occasionally performed at jam sessions and in piano bars, she primarily worked outside of the music industry until 1986. By then, having discovered in turn Al Jarreau, Linda Ronstadt's Nelson Riddle recordings, Nancy Wilson and Sarah Vaughan, Amandah knew that she simply had to sing jazz.

She relocated to Portland, Oregon five years later and became active locally, performing in jazz clubs and at concerts. She was particularly inspired by bassist Leroy Vinnegar and guitarist Charlie Byrd, developing into the warm and highly expressive singer that she is today. Byrd convinced Amandah that she should accompany herself on piano, a move which has added to the appeal and musicality of her performances. Amandah Jantzen's singing is well showcased on her Vancouver, BC, recordings, Some Other Time, Devil May Care and My Secret Love. She is also featured on a third of the songs on the Ellen Vanderslice compilation, Once in A Blue Moon, and half of the tunes on The Standard Vanderslice. Her last CD, Northern Star/The Singapore Sessions was recorded in Singapore and released in 2007. Because of the quality of these recordings and the popularity of her live engagements, I have picked Amandah as one of the top 500 jazz singers of all time and have included her in my book, "The Jazz Singers," published by Backbeat Books in October, 2008.

In addition to working in Portland (including long-term bookings at both the Doubletree and Heathman Hotels), Amandah has performed extended engagements in Dutch Harbor, Alaska; at the Salishan Golf Resort on the Oregon Coast; at the Stone Harbor Resort in Sturgeon Bay; Wisconsin, and at the historic Ankeny's Restaurant atop the Ridpath Hotel in Spokane, Washington. She has also been featured as a soloist at the Du Maurier Jazz Festival in Vancouver, BC; in Florida with tenor-saxophonist Turk Mauro and multi-instrumentalist Ira Sullivan, at Bally’s Casino in Las Vegas, and has opened concerts for Mc Coy Tyner, Charlie Byrd and Kevin Mahogany. She has been steadily building a growing following in Key West, Florida as well over the past few years, where in 2011, she was seen performing for elite guests such as Billy Joel & Christian Slater at the exclusive Little Palm Island Resort.

Internationally, she’s worked several engagements in Singapore, as well as lengthy bookings in Seoul, South Korea; Bali, Indonesia; New Delhi, India; Shanghai, China; Bangkok, Thailand; Hanoi, Vietnam; The Maldives; Chengdu, China; Tokyo, Japan; Shenzhen, China; and, Changchun, China. She has been extended on many of her contracts, and returns regularly to perform in Tokyo at Park Hyatt’s The NY Bar, famed for it’s portrayal in the movie “Lost In Translation.” Additionally, in early 2008, she was featured in the Emirates Air Jazz Vocal Concert Series at Nardis Jazz Club in Istanbul, Turkey. In July of 2010, Amandah was asked to do a one night concert at Singapore’s infamous (“by invitation only”) Esplanade Recital Hall.

In early 2006 she placed second in the 5th Annual Jazz Connect International Vocal Competition. She has developed a steady base of “House Concert” appearances in the US as well as performing at many jazz venues in-between her bookings in Asia. An enthusiastic and charismatic performer who is also subtle, Amandah Jantzen is a constant joy, both musically and personally. She is on her way to becoming a major name in the overlapping worlds of jazz, cabaret and classic American pop music. 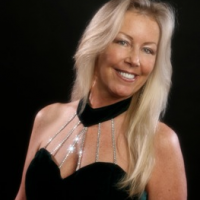 All About Jazz musician pages are maintained by musicians, publicists and trusted members like you. Interested? Tell us why you would like to improve the Amandah Jantzen musician page.