An echo can soothe, and an echo can haunt. In Roman myth, Echo is the beautiful nymph with the musical voice forever calling after a boy in love with his own reflection. Critically-acclaimed singer-songwriter Alyssa Graham's sophomore CD, the aptly-titled Echo, is a musical travelogue that traces the arc of a modern-day love affair and infuses it with a mlange of Jazz, Pop and Brazilian rhythms, bound together by the unforgettable timbre of Graham's stunning voice. Echo was produced by Jon Cowherd (The Brian Blade Fellowship, Lizz Wright) and is set for release July 29th on Sunnyside Records with distribution through Ryko.

Called “A beautifully controlled and sumptuous voice" by All About Jazz, “Something special and truly unique" by critically-acclaimed vocalist Luciana Souza, “Lovely and haunting" by The New Yorker and “Comforting, exciting and spellbinding" by People Magazine, Alyssa began laying the foundations for Echo in January of 2006. It was a more than two year-long process, influenced by Alyssa's travels throughout Brazil, India, Africa and Europe, as well as her long-time love affair with guitarist and lyricist Douglas Graham. “Echo is like a fairy tale," says Alyssa, “It reveals the different complexities of an alluring lover, equally at home with flirtation and passion and knowing the precise distance between the two. A love story that is true and eternal. Doug and I have been together since we were kids and this record is truly a tribute to our successful love story and to many of the places we have traveled together--emotionally and geographically."

From a love song written in the aftermath of an argument and the pull of honeyed love that almost conceals a fear of loss ("Butterflies") to a song about escaping the world together ("Pictures of You") to the Latin surrealism of the title song (inspired by the last five minutes of the classic Italian film “La Notte") co-written by Bryan McCann, a childhood friend and Professor of Brazilian and Latin American History at Georgetown, Echo is a mythical blend of magical originals and familiar melodies filled with the musical unexpected. But perhaps the most unique highlight of the CD is the tune “Involved Again," especially significant in that it was actually written for Jazz legend Billie Holiday and was set to be recorded on her next album. Unfortunately, Holiday passed away and the writer of the song, legendary composer Jack Reardon ("The Good Life") was so saddened by this great loss that he shelved the track for fifty years until a chance listen to Alyssa's debut CD, What Love Is, prompted him to contact her. This unheard musical gem was recorded by Alyssa and is a song integral to the mood and sultry stylization of Echo.

Alyssa's creative resolve, passion for storytelling and vocal eloquence are the products of her enduring artistic exposure. Growing-up just outside of New York City, Alyssa's father took his daughter to see many of the musical greats as a child--Ella Fitzgerald, Dizzy Gillespie, Nancy Wilson, The Temptations, Neil Young, Bob Dylan--and after studying piano, saxophone and guitar, Alyssa attended both Ithaca College and The New England Conservatory of Music where she studied Jazz Voice and Contemporary Improvisation.

While in college she co-founded and performed with the band Blindman's Holiday, a six-piece ensemble rooted in original compositions. The band became legendary on the college circuit and secured some high profile performances with such artists as The Band, Hot Tuna, Lisa Loeb, Jessie Harris (Norah Jones) and The Wailers. Alyssa went on to develop her unique artistic style, playing on her fresh, breezy phrases and lilting Brazilian rhythms that hypnotize the senses.

In 2005, Alyssa launched her solo career with her critically-lauded debut CD, What Love Is, chosen by All About Jazz as one of the “Best New Recordings of 2005" and Jazziz's Annual “Women In Jazz" issue. In addition to the release of Echo, Alyssa is currently working on two other projects as well--one with famed trombonist Wycliffe Gordon and the other with Jack Reardon. Show less

Alyssa Graham Performs at the Tin Angel on January 30th

"...beautifully controlled and sumptuous voice." - All About Jazz
" Comforting, exciting and spellbinding." - Eleni Gage, People Magazine
" Wows listeners with plush poignancy." - The New York Press
"...lovely and haunting." - Alec Wilkinson, The New Yorker
"She's something special! Her voice is so natural and her sound truly unique." - Luciana Souza (Grammy-winning vocalist)
"Alyssa Graham is a true voice. Pure, beautiful, natural, honest and effortless as speech itself. Her distinct style is sure to 'speak' to you as it has 'spoken' to me." - Wycliffe Gordon (Jazz Journalists Association's two-time Trombonist of the Year) 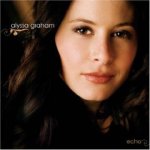 From: Echo
By Alyssa Graham

All About Jazz musician pages are maintained by musicians, publicists and trusted members like you. Interested? Tell us why you would like to improve the Alyssa Graham musician page.