Aaron Johnson is a Saxophonist, Clarinetist and Flutist based in New York City where he leads his quartet and freelances as a jazz musician and commercial woodwind doubler.

As a commercial/classical/woodwind musician, Aaron has performed at the Metropolitan Opera, played in the house band for Bill Irwin’s Old Hats, Toured with 2009 American Idol Winner Lee DeWyze and is a member of the Siletz Bay Festival Orchestra (Oregon) in addition to freelancing with many local/regional symphonies/chamber ensembles in the New York Metro Area. Currently playing lead alto with the John Colianni jazz orchestra, Aaron is also a member of the Ken Peplowski big band and leads his own groups and projects nationally as well as abroad.

In addition to his performing, Aaron Johnson is an in demand scholar and lecturer of Jazz history. He has presented and spoken many times at Jazz at Lincoln Center, conducting pre-concert lectures, moderating panels and presenting listening party lectures. Other schools Aaron has presented at include NYU and the College of William & Mary.

“Among the reed players there’s Aaron Johnson, a king of protege of mine... a real head turner.” 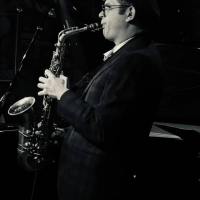 All About Jazz musician pages are maintained by musicians, publicists and trusted members like you. Interested? Tell us why you would like to improve the Aaron Johnson musician page.