By KARL ACKERMANN
October 13, 2019
Sign in to view read count 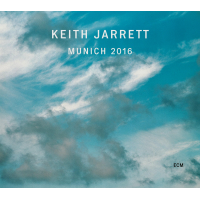 The second coming of Keith Jarrett—post-Chronic Fatigue Syndrome—was well behind him by the time he performed in Munich, Germany in 2016. The piano prodigy is captured in ECM's home town at a Philharmonic Hall solo concert at the end of his European tour. His improvisational skills in top form, he displays his genius across twelve extemporaneous compositions and three encores, on the two-disc set Munich 2016.

For this recording, Jarrett broke with his frequent practice of live improvisations that traversed one or two complete sets, as he did on Sun Bear Concerts (1978), Concerts Bregenz, München (1982), Paris Concert (1990), La Scala (1997), and A Multitude of Angels (2016). Here Jarrett creates what ECM's liner notes refer to as a spontaneous "suite." In listening, it isn't obvious that the sequence has such a purposeful goal, but that's of little real consequence. All the familiar Jarrett motifs and themes are here. Munich 2016 devotes considerable space to free improvisations such as the thirteen-minute "Part I," the brief, fast-paced "Part VII," and "Part XI." Jarrett creates a thoughtful avant-garde piece with "Part X," gospel, on the moving "Part III," blues on"Part IV" and the rollicking boogie-woogie of "Part IX." His unique gift for creating pastoral lyricism in real-time is on display in "Part V" and "Part VII."

There is the occasional meandering such as "Part II" and "Part XI," where melodies take shape but never quite developed legs. These are rare exceptions in the overall program. Jarrett's encores—a wildly popular segment of his concerts—are superb on Munich 2016. "Answer Me, My Love," a 1953 German song, has been a staple of Jarrett's live repertoire since 2010, in both his trio and solo performances. The depression-era song "It's A Lonesome Old Town" has been recorded by dozen's of artists, as instrumentals and vocals, and is tastefully rendered here. Jarrett closes the encores with "Over the Rainbow," something of a signature wrap for the pianist's live performances.

The improviser's diversity and unrelenting inventiveness continue to be stunning. It is possible to listen to Jarrett's dozen live solo collections—including box set and multi-disc releases—and never feel that you're covering the customary territory. Barring the standards-focused encores, nostalgia is no match for the emotional power of Jarrett's spontaneous creations.