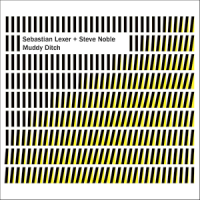 In a similar manner to the simultaneous Fataka release by Evan Parker and Seymour Wright, Muddy Ditch successfully pairs a long-established member of the London improv scene with a player who emerged from Eddie Prevost's weekly workshop —drummer Steve Noble and pianist Sebastian Lexer, respectively. But in Noble and Lexer's cases, the descriptions "drummer" and "pianist" are barely adequate, only scratching the surface of what each of them does.

While Noble's awesome power always ensures he is a first rate drummer, as he demonstrates here he is also a stunning improviser on percussion, able to generate a vast array of sounds and effects at a moment's notice in response to his playing partner. While never losing sight of the pulse—injecting an occasional cymbal or snare shot to keep it on track—his playing concentrates primarily on the qualities of the sounds themselves. Consequently, he is just as much in the spotlight as his partner. Lexer himself is credited with "piano+," a fitting designation for the breadth of sounds that he conjures from the instrument with the use of electronics plus laptop, notably to sustain notes longer than a piano alone would permit. Although the listener is never allowed to forget that Lexer is playing piano, his music contains enough variety to mesh with the range pouring forth from Noble.

The two tracks on Muddy Ditch were recorded live at Cafe Oto, almost three years apart, "Pool" in October 2011, at one of this duo's first gigs together, and "Loess" in June 2014. Their durations are twenty-eight and thirty-seven minutes, respectively, lengths which allow plenty of time for the pair to explore one another's playing without seeming unduly rushed or over-elaborating; everything proceeds at a pace which feels just right. Their music covers a wide variety of dynamic levels, from the quietest exchanges of barely audible tappings through to swelling climaxes, the moves through the gears always feeling natural and unforced.

Despite the years between the two pieces, there are no obvious changes or developments in the pair's interactions between 2011 and 2014; right from the off, the two seem to have been compatible and attuned to each other, without any of the tentative or over-cautious exchanges that can characterise new improv pairings. As with that Parker / Wright disc, we must hope that Muddy Ditch is followed-up with another release from this duo as soon as possible.