King David and The Talk of the Town Band: Mr. Success Chicago

By EDWARD BLANCO
November 27, 2009
Sign in to view read count 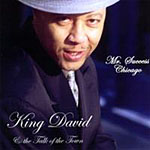 New York vocalist King David makes no excuses for his love of good old swing music, the sound of the big bands and the music from the 1930s to the 1960s, as he borrows from The Great American Songbook in reinterpreting and updating terrific old standards on Mr. Success Chicago, with has Talk of The Town backup band. David is sometimes seen as a throwback to the past; influenced by the music of such legends as Frank Sinatra, Sammy Davis, Jr. and Bobby Darin, David may seem out of place in today's world.

The album was originally to be titled Mr. Success, however after being introduced to the people, music and sounds of Chicago by producer/arranger Jim Martin, David was so taken by the windy city that he added Chicago to the title. One of the turning points for David was the level of talent that Martin was able to call on for the backup band. The Talk of The Town band comprises an all-star list of jazz musicians, including trumpeter Rob Parton (Rob Parton's Jazztech Big Band), saxophonist Marc Colby, trombonist Tom Garling, drummer Bob Rummage and pianist Larry Novak. The band also includes a nine-piece string section for a touch of class.

Gifted with a soothing baritone voice, David can belt out a swinging number with a measure of power, but just as easily mellows out when a slow ballad calls for it. Starting with a swinging big band number, David opens up with a brassy read of "On The Street Where You Live," featuring a lively solo from Colby. The swing continues on Harry Warren's "Lullaby of Broadway," and then calms down on the Anthony Newley classic, "Who Can I Turn To." The other soft ballad of note is Harold Arlen's "The Gal That Got Away," where David is especially warm in his approach to the lyrics.

David does not shy away from belting out a song; in fact, it is his assertive approach on songs including "Come Back to Me" and "Here I'll Stay" that distinguishes his singing style from other vocalists. The music ends with a staple from the Sinatra songbook, and a favorite of David's, "Mr. Success"—the perfect finale, drawing on the band for some fine instrumentals in a swinging piece of music that features the singer at his best.

With charts from the past and some swing from the present done Chicago style, King David revives a selection of beautiful songs and puts his own stamp on many oft recorded standards. On Mr. Success Chicago, he marks a successful musical excursion into the swinging music of the past. Somehow, it seems befitting for a man often seen in a smart suite and wearing a fedora.

On The Street Where You Live; Lullaby of Broadway; Who Can I Turn To?; Come Back To Me; Artificial Flowers; Here I'll Stay; Haven't We Met; The Gal That Got Away; Don't Rain On My Parade; Mr. Success.