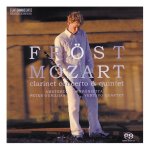 Clarinetist Martin Frost's recent Weber was exceptional, warranting an appraisal of his earlier Mozart clarinet music. It is difficult to overstate the cultural value of Mozart's Clarinet Concerto and Clarinet String Quintet. Both were composed late in Mozart's young life, the quintet published in 1789 and the concerto in 1791 (the year of his death). Both pieces were composed for Mozart's friend Anton Stadler (1753-1812), and were originally scored for the basset horn (also called a tenor clarinet) having a range down to the low written C below the written E of the standard clarinet's tonal range.

The Clarinet Concerto was premiered in Prague October 16, 1791 by Anton Stadler, approximately two months prior to Mozart's death. Mozart's final illness, most likely due to acute glomerular nephritis as sequelae to rheumatic fever Mozart suffered as a child, began in August 1791 progressing to his death December 5th of that year. Mozart was quite ill while composing his Clarinet Concerto (as well as his Requiem), yet if offers some of his most sunny musical thought. Only in the famous adagio does one get some hint of sadness. The clarinet quintet in the same key of A as the concerto is a very similar piece of music with an introduction that anticipates the concerto. It is no more or less sunny than the concerto, even in the slow movements.

Martin Frost chooses to use the basset horn for the concerto to great effect. The clarinetist divines from his instrument all of its rich peaty sound, most concentrated in the adagio but equally evident in the Allegro's briskly modulated transitions and section closings. Likewise the quintet, with its stripped down quality, a skeletal premonition of the concerto. Peter Oundjian's direction of the Amsterdam Sinfonietta, using modern instruments, is balanced and refined. BIS's perfect sonic integration of orchestra and soloist provide the most balanced presentation of these pieces on digital to date. There are many fine performances of these works already available and it will prove hard for one to elbow its way to the front of the pack. But if one can, it is Frost's.