By Dan McClenaghan
August 25, 2003
Sign in to view read count 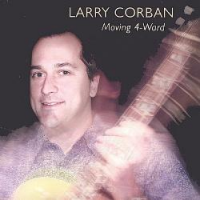 From Larry Corban's tone on Moving 4-Ward, my guess is that the guitarist would make a helluva blues player. Sharp-edged, driving, metallic chording, stinging single notes, and the seemingly effortless ability to move back and forth between the two modes... he could be playing behind Buddy Guy.

I don't know about his blues career, but Corban proves himself a fine jazzman on this quartet outing. The guitarist has played with qunitets, quartets, trios, duos behind singers; but on Moving 4-Ward he teams with trumpeter Avishai E. Cohen, bassist Omer Avital, and drummer Daniel Freedman for a clean and propulsive set of post-bop workouts. Corban's crisp attack counterpoints trumpeter Cohen's stretched lines, with the band sounding at times like a late fifties Miles Davis group.

"One for Wayne" is dedicated to saxophone great Wayne Shorter, an "inside" reharmonization of "I Hear a Rhapsody," with Corban sounding very much like a young Larry Coryell. "Sea of Fire" is a blues with a nice bass groove that has Cohen grousing around Corban's sharp noting. On "Something Pretty" the trumpeter relaxes into lyrical playing in front of an easy groove.

A very solid and sometimes edgy mainstream performance from start-to-finish.

Moving 4-Ward, One for Wayne, On the Fly, Sea of Fire, Something Pretty, Wind Chimes, Masa Bossa, Purple, It's On the House, Killin' Time