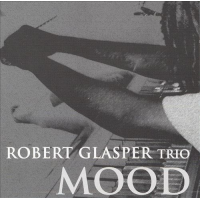 Robert Glasper is a 20-some pianist originally from Houston who has gained experience and exposure on the New York scene in the bands of Russell Malone, Mark Whitfield, and Marcus Strickland. On the jazz tip, he has also led a noted, well-frequented jam session on Thursday nights at the UpAndOver Cafe in Brooklyn. There's another side to Glasper though: he's been a mainstay in the touring band of R&B sensation Bilal (a guest on two tracks here). So on Mood, his debut record, he brings both influences to the fold, albeit in a way definitely slanted to the jazz side of his expression.

Mood might be interpreted at first sight to be a "mood record." This is accurate only as relates to the tracks with Bilal though, which include a very ethereal version of Herbie Hancock's "Maiden Voyage" and the vocal feature "Don't Close Your Eyes," which is definitely a moody ballad to say the least. For those not familiar, Bilal is not a stereotypical male R&B vocalist in any way, so he should prove to be of interest to openminded listeners. He doesn't try to be a "jazz singer" here but he's not asked to be either, only to bring his thing to the table in terms of generating some serious atmosphere.

The majority of the record, though, is devoted to well-executed, swinging and creative piano trio music made in tandem with Glasper's comrades: bassist Robert Hurst and drummer Damion Reid. This is the same trio that recorded under Bob Hurst's leadership two years ago on UnRehurst, also a very worthwhile record, and it's clear that the rapport the three share has continued to develop. It's a very rhythmically flexible unit that has no trouble changing feels and seems as comfortable playing a mellow ballad as something up-tempo. "Lil Tipsy," in particular, offers a great example of the unit's flexibility with time, gradually speeding up and down with wonderful precision: a trio with an automatic transmission, it would seem. "Alone Together," meanwhile, sounds positively Mehldau-like in the reading of the melody. When the solos begin, though, it's clear that's not the route chosen.

Robert Glasper, as the main melodic voice, excels in providing crisp melodic statements. His soloing is not yet terribly distinctive but there are compensations in the form of a nice, lighter touch and in restraining his considerable chops in the service of space.

San Francisco-based horn player John Ellis, a member of Charlie Hunter's various outfits, guests here on two cuts: alongside Marcus Strickland on "L.N.K. Blues," and with Mike Moreno, a Houston-based guitarist who has often worked together with Glasper, on "Mood." These soloists bring a more extroverted quality to the affair that serves as a nice contrast to the sometimes-subdued sound of the trio by itself. The title track, featuring Moreno and Ellis, is especially memorable as an example of Glasper's writing ability. It's a plaintive, open piece with a "suspension bridge" that would be quite at home on a Pat Metheny or Brian Blade record.

Overall, this is a nice if not quite outstanding record. Those who have heard Glasper live or on record—on Mark Whitfield's Raw he is particularly fine—will welcome this worthy first outing by the young pianist. And for those as yet unacquainted with Glasper, there are plenty of younger pianists by whom one could do worse. Look for Mr. Glasper to be an in-demand sideman and recording artist for a long time.