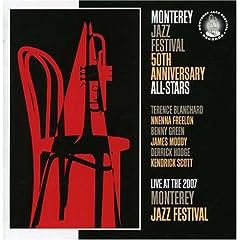 For its 50th anniversary last summer, the Monterey Jazz Festival assembled a multi-generational allstar group—including tenor sax legend James Moody, trumpeter Terence Blanchard, pianist and musical director Benny Green, bassist Derrick Hodge, drummer Kendrick Scott and singer Nnenna Freelon—to reflect the festival's long and diverse musical history. The live recording of the group's performance exhibits some of the unevenness common in these sorts of jam sessions, but the set is more cohesive than most and there are some brilliant moments, most of which involve the irrepressible octogenarian Moody.

Moody began playing the festival with Dizzy Gillespie in 1962, before most of his bandmates here were born. But the 82-year-old proves he's more than capable of keeping up with his much younger colleagues right from the start, going toe to toe with the formidable Blanchard, who's in top form throughout the show, on Dizzy's breakneck-paced "Bebop." Moody also reminds listeners that he's one of the great entertainers and comedians in jazz during a flirtatious vocal duet with Freelon on Duke Ellington's "Just Tease Me," into which he also tosses a quote from his big hit, "Moody's Mood for Love."

Freelon, an engaging singer whose style recalls both Sarah Vaughan and more contemporary R&B, is heard to fine effect on the chestnuts "Misty" and "Time After Time," as well as on an arrangement of "Romance (Winter Love)," a melancholy selection from Gerald Wilson's "Monterey Suite."