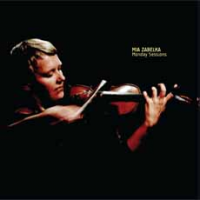 Live in concert, Austrian violinist Mia Zabelka is an electrifying performer, whether appearing solo or with others. In any context, she has the uncanny knack of commanding the stage and always being the centre of an audience's attention, achieved by the intensity and focus of her performances, rather than any gratuitous showmanship. (For a typical example, see the YouTube clip below of Zabelka in Trio Blurb with Maggie Nichols and John Russell, neither of whom is renowned as a shrinking violet!)

As she demonstrated on her previous solo album, M (Monotype, 2011) Zabelka's combination of acoustic or amplified violin, electronics and voice enables her to construct atmospheric soundscapes full of variety and drama. She accurately describes her own playing as "a language ensconced between acoustic improvisation and experimental electronic violin music."

Monday Sessions is Zabelka's solo follow-up to M and is markedly different from it. On it, she eschews electronics and is only credited with acoustic violin and voice. Recorded on four Mondays in January and early February 2015, the album consists of ten relatively short tracks, ranging in length from just under three minutes to just under ten. Every track is just the right length to convey what is has to say without ever sounding rushed or padded out, each a self-contained gem that demands to be heard repeatedly.

Without electronics or amplification, Zabelka blends her violin and voice together in ways that are fresh and original, avoiding clichés while unmistakably being part of the improv tradition and lineage. On different tracks, she coaxes vastly differing timbres and voices from her instrument and herself in order to create a variety of moods, as indicated by diverse track titles such as "Imminent Disaster," "Stream of Consciousness" and "Remembrance."

Those who are already familiar with Zabelka will be understandably keen to hear this album and will be hoping for more soon. Those who have not yet seen or heard her are strongly recommended to listen to Monday Sessions; it should convince them to see her in concert as soon as possible.