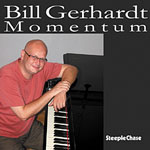 It takes uncommon knowledge of jazz history to begin a solo piano album with a dedication to Herbie Nichols. "One for Herbie" is only one of the delightful surprises from pianist Bill Gerhardt on this winning solo recital, sumptuously recorded on a 10-foot Fazioli grand piano at the SteepleChase studios in Europe. Based in Asheville, North Carolina, Gerhardt may be known to Big Apple jazz fans for his work in Cotangent, a quartet he co-leads with the Dutch (NY-based) saxophonist Marc Mommaas (the pianist lived in Amsterdam for a decade). A founding member of Asheville's Jazz Composers Forum, Gerhardt's compositions as well as his playing are showcased.

"One for Herbie" references Nichols' tropes like circling around a theme and inserting dissonant hints and off-kilter timing into Art Tatum-esque arpeggios. It also develops a strong melodic theme reminiscent of "Have You Met Miss Jones?." Gerhardt employs prodigious technique developing fully two-handed, often independent, lines and a limpid, bright touch. But he's never ostentatious, using technique to further musical rather than egoistic goals. Every piece here—eight of the nine are his own—is distinct and self-contained: complete piano renderings of a concept or idea fully realized melodically, harmonically and rhythmically. Although the album title is Momentum, a close synonym of that term is just as, if not more, appropriate: flow.

Gerhardt's performances proceed with an effortless forward motion, whether brightly against a second line refrain, as in the jaunty "Daughter"; impressionistically as in the cityscape tone poem "Amsterdam"; or with growing intensity like the interactive, chords across two hands, drive propelling "Cloud Field." And each tune has its own mood, from the surging sweet swing of "Coincidences," with its agile left-hand figures to the logical momentum of, yes, "Momentum."

Two strongly impressionistic pieces conjure up weather and geography with sensual precision. The brooding "Sleet" reflects on the predominant winter weather of Gerhardt's boyhood home of Cape Giradeau, Missouri. The buoyant waltz spring of "Emerald" is a souvenir of the pianist's vacations on Emerald Island off the Carolina coast, "a secluded, peaceful place ... [named] because the water there is so clean and clear." On "Gary's Waltz," by Gary McFarland, Gerhardt's slow, dreamy version seeks to communicate "the angelic beauty [McFarland] was able to convey." This is that rare solo piano jazz CD that rewards repeated listens.