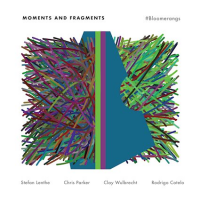 When life gets tough, sometimes the only thing you can do is take a moment to step back and reconnect with feelings of positivity. Maybe this comes from a fond memory, a glimpse out the window or perhaps, for readers and writers of this website, time spent listening to good music. Fortunately, #Bloomerangs has some of the latter to add the 2020's offerings. The core collective of musicians that is spread across the United States (and who often feature international guests in its eclectic performances) are out with its sophomore album, Moments and Fragments (Instru Dash Mental, 2020).

The ensemble's musical director and guitarist Rodrigo Cotelo led the production alongside drummer and composer Chris Parker. Cotelo says of the release, "The inspiration of the release comes from working with the musicians that are part of it.  At the time, they were all going to school at Jacobs School of Music of Indiana University and I was working in Bloomington when we... started to hang out. We wanted a historical record of our time together."

True to it's title, the record features a wide variety of moods and styles. The avant-garde is represented in pieces like "Catch a Clue," which moves between a driving 7/8 meter and a open, seemingly freely improvised section, or the harmonically ambiguous "Change of Pace," described as something like a "Grunge Jazz Etude." There is plenty to listen to for fans of jazz fusion as well. "In Some Shape" finds Cotelo reminding the listener of both John Scofield and Pat Metheny via his articulations throughout the head and solo. I Can See Your House From Here (Blue Note, 1993) comes to mind. "Leaps and Bounds" provides pianist Clay Wulbrecht an opportunity to stretch out while bassist Stefan Lenthe keeps impeccable time.

There are also pieces more difficult to classify as they draw from a variety of sources, such as the Latin influenced "Untold" or the short vignettes "Normality Links" and "Layers of Complexity," which are seemingly the "fragments" alluded to in the record's title. Another great track is "Home," the records opener. A soulful, medium-slow number with a bluesy melody, interspersed with beautiful block chords from the piano, it is a wonderful introduction to a unique record. Fans of virtually any variety of jazz, be it fusion in the style of Metheny or Scofield or post-bop or free, are likely to enjoy this album

Home; Leaps and Bounces; In Some Shape or Form; Untold; Catch a Clue; Another Melancholy Waltz; After the Fact; Layers of Complexity; Change of Pace; S Mitchell St; Mind your F; Normality Links; That Sums it Up