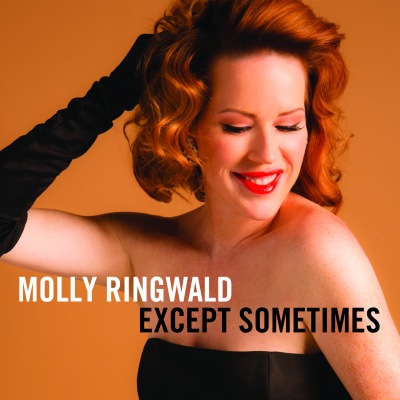 Molly Ringwald currently stars in the role of Anne Juergens on The Secret Life of the American Teenager on the ABC Family Channel. Her role is a nice fit for the Golden Globe -nominated actress, who became a household name as a teen film actress referred to as "your favorite teenage crush."

Her popularity attained to star status as the result of several memorable film roles starring as one of the "brat pack" stars alongside Judd Nelson, Emilio Estevez, Ally Sheedy and Anthony Michael Hall. It was through a succession of hit films with her fellow teen comrades that her acting career was placed on the road to its current success.

Ringwald has clearly figured out the formula for career longevity, with an acting career that has been steady and consistent since her childhood.

On top of her busy acting schedule, however, Ringwald has recently introduced a jazz album, Except. Sometimes (Concord, 2013), for fans to explore and discover as few know much about her other life as a jazz singer.

Ringwald's passion for jazz began during her childhood at a very young age. Growing up with her dad, pianist Bob Ringwald, she was surrounded by the sounds of jazz in her formative years, and began singing Fats Waller and Bessie Smith songs with her dad's Dixieland band at the age of three. At the age of six, she found herself on a professional studio recording "I Wanna Be Loved by You," with Bob Ringwald and his popular band, the Fulton Street Jazz Band.

Molly Ringwald discovered her musical talents at a young age, along with her ability to act, each gift seeming to have emerged in its own time through hit projects throughout her career. Fans were introduced to her natural acting abilities as she starred in a string of films directed by famed producer John Hughes, including cult classics Sixteen Candles (1984), The Breakfast Club (1985) and Pretty in Pink (1986). Although she continues to be in demand as an actress, Ringwald has now decided to rediscover her jazz roots and devote herself to a personal project that she envisioned for this particular time in her life.

Ringwald has put on her musical hat and is traveling on the road, performing a series of concerts to promote Except. Sometimes, an album whose eclectic title is reflective of Ringwald's personal input to this project, created from a list of her favorite popular songs, which represent her roots in Dixieland and modern jazz.

Ringwald creates the spirit of romance under her raw jazz tonality and torchy vocals on "I Get Along Without You Very Well," as she intimately introduces herself as a purist in her interpretations as a modern jazz vocalist. She also shows how emotion can be subtle through her lyrical flow, singing of her journey to love and the ups and downs of romance in her rendition of "The Very Thought of You."

One song on the album does not originate from the classic Great American Songbook; instead, Ringwald draws on a Billboard hit record originally recorded by pop/rock band Simple Minds as the signature theme song to The Breakfast Club. Ringwald takes the tempo down to slow and steady, transforming "Don't You (Forget about Me)" into a sultry jazz ballad, serving as a heartfelt tribute to her friend and former boss, Breakfast Club producer/writer/director John Hughes. Ringwald's interpretation of the song is respectfully epic, given the original release tied into the core branding of the "brat pack," at the height of its popularity with teenaged fans across America. Defining a new nostalgia, RIngwald reinvents the Simple Minds hit as a new contemporary jazz song that represents her innate ability to take what was once classic and make it new again, fitting today's time and sound.

Ringwald gauged the timing of her album's release to the current resurgence of a global popularity of jazz, as reflected in the career successes of other artists including Esperanza Spalding,Jane Monheit and Diana Krall.

Ringwald's life has seasoned her as an interpreter of songs concerning relationships, love and romance. She is a mother of twins; she's fallen in love and gone through obstacles along the way that now give her the right to sing in the key of jazz and transform it into something different and unique through the essence of pure interpretation.

Ringwald sings her life stories throughout Except. Sometimes, marking a return to her first love: the very jazz music with which she grew up. And she delivers, making each song her own.