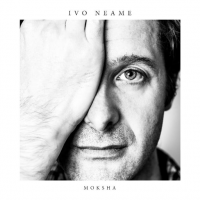 A solo album is generally a defining statement of identity, especially for musicians who juggle multiple outlets, but Ivo Neame has such a hard time sitting still that even he must have a hard time pinning down his sound for very long. His piano makes a key voice (pun unintended) in the Escape Hatch quartet and piano trio Phronesis, both acoustic outfits that relish stretching the conventions of their respective formats. Still, his solo outings in between range even wider in terms of sound and style, and Moksha shows him sounding more accomplished and restless than ever.

With the outer-space-lounge groove of "Vegetarians," the quartet wastes no time establishing that they're not afraid to get a bit wild and frisky. This session leaves out the vibraphone that lightened the tone of Strata (Whirlwind Recordings, 2015), and the leader's array of electric keys make a heavier sonic palette that would never fit with his more collaborative ensembles (though the piano still gets a substantial workout as well). His compositions likewise head straight for the fringes of jazz—"Outsider" flirts with aimless-sounding avant-garde, the frenetic "Laika" finds his organ and George Crowley's tenor sax trading wild unison runs with careening solos, and yet they're not afraid to slow down for a nice smooth ballad either when the mood hits.

Loose as the songs and solos get, the fluid keys and James Maddren's tighly crisp drumming keep the wildness from ever getting out of control. Neame's voice as composer remains as ambitious and unpredictable as his flights on the keys. The term "Moksha" is about liberation above all, and this recording certainly signifies freedom from expectations, predictable song forms and anything too conventional at all.