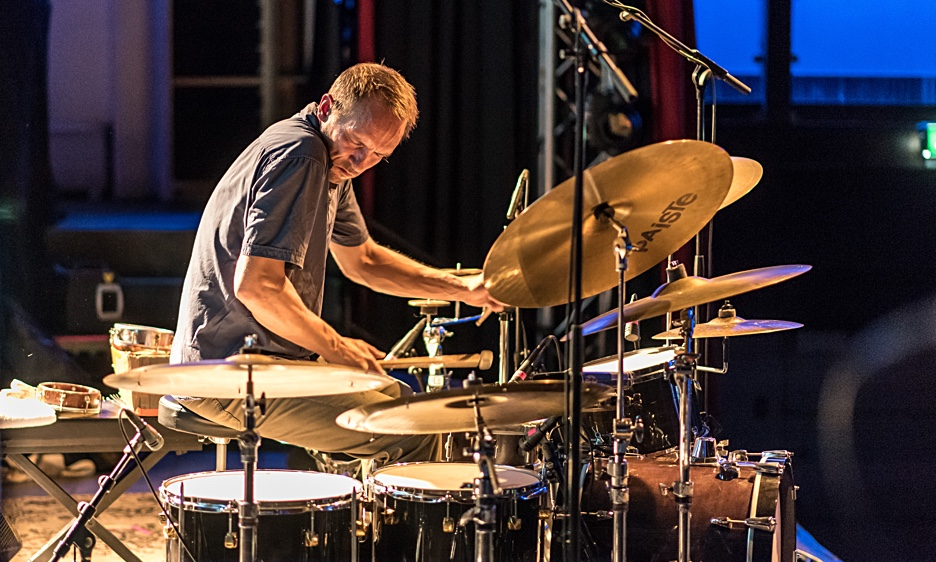 By MARTIN LONGLEY
April 23, 2020
Sign in to view read count
The Norwegian drummer Paal Nilssen-Love was set to bring his Large Unit to the long-established Moers Festival on Saturday 30th May. Tim Isfort, the artistic director of this German weekender, has just presented a press conference on the morning of 22nd April, revealing the now-transformed aspect of the event. To quote the Moers Festival's handy 2020 slogan, they will find 'new ways to fly.' The altered plan is to continue without an audience, as a live-streamed programme which will be broadcast by the Arte Concert television network. There will be two stages, at opposite ends of the main concert hall, with distance maintained between performers, and doubtless a full complement of hazmat-suited regalia.

Given that the exact artist spread will be governed by conditions of the moment, in terms of travel restrictions, it's now not quite clear whether Nilssen-Love and all of his posse will make it into Germany intact. This is a mega-band that's been locked together since 2013, more recently undergoing expansions into vividly pulsating spheres represented by the musics of Brazil and Ethiopia. Plus, a violent streak of bonus Dutch punk.

They played at the First Unitarian Congregational Society, in Brooklyn, back in 2015, but that was when they were more directly focused on a controlled free jazz conflagration, inflated by a wing of extreme electronics. There aren't many churches where a believer can purchase Large Unit underpants upon entrance. All was perfection, instruments clearly separated, ramming out when required, and roundly resonant during the calmer sections of Nilssen-Love's music.

The compositions tended to be reasonably extended, tightly constructed with repetitive riffing sections, divided sometimes into satellite combos, and always allowing ample room for expressive individual improvisations. It was clear from facial expressions that the players were frequently surprising themselves, delighting in unpredictable sonic results, unfamiliar chance patterns or sheer blown-out chops, members shocking with a fresh way of expressing the score's blending of symbols, written instruction and conventional notation.

Three years later, at the Moldejazz festival, that extraordinary Ethio-Brazilian expansion had completely changed what was now an XL Unit, with an extraordinary fusion emerging from the anticipated abstract extremity. Now, a 24-strong line-up was bolstered by a pair of guesting Brazilian percussionists, a sextet of Ethiopian singers, dancers and instrumentalists (collectively called Fendika), as well as trouble-making guitarist Terrie Ex, from the Dutch angular rock outfit The Ex.

Perhaps surprisingly, this mega-orchestra managed to jump-cut between its chosen forms, highlighting the affinity between rampant noise and ritualized groove. The combination was stunning, with the Ethiopians eager to head for the extremes, and the Norwegians enjoying a previously unheard rhythmic propulsiveness. It was surely the best Ethio-free-Nordic-Brazilian freak-out in the world, with a long soundcheck-delayed beginning at 12.50am, then hurtling way past the 2am mark, with zero dawdling on the way.

Nilssen-Love now recalls from his lockdown home in Norway: "Terrie Ex invited me about ten years ago, to Ethiopia for the first time, and that really did change my mind about very many things. Life, music, culture, dance, socializing."

A few years afterwards, Nilssen-Love was assembling the Large Unit, and concocting its repertoire. "There were some pieces that had some elements of rhythms that I'd picked up in Ethiopia. I remember Ken [Vandermark] saying at one point that he enjoyed hearing me play some Ethiopian rhythms, and I didn't know what he was talking about. Then I realized that the music had kind of evolved. There were elements of that in the compositions that I wrote, from day one, in the US, and then when we made several return trips to Ethiopia, and then Brazil, really enjoying the music and culture there. At one point, in Brazil, I thought, what would happen if I put these artists together with the Large Unit, as soloists or guests, or regular members of the band?"

Your scribe quizzes Nilssen-Love about that monumental Molde gig, and it turns out that, so far, it's the only time where all of those players have been united onstage, outside of Ethiopia. "We did a gig with many different ad hoc line-ups, trios, duos, and an Ethiopian percussionist came up to me afterwards, and asked me 'what do you call this kind of style?.' I didn't understand what he was asking, he was saying, was it jazz, or swing, or samba?"

Nilssen-Love told the percussionist that it was free improvisation, as the Ethiopian sounded like he was in need of a term to use. "Still, I'm not sure he understood what it was about," muses Nilssen-Love. "To just walk onstage with whatever you have, and make the best out of it, improvising freely."

The Unit had the luxury of a two-day rehearsal at that Molde gig. "For sure, the Ethiopians were in shock when they heard some of what the players in Large Unit were doing, not least with the Brazilian instruments, which they'd never heard before. In Addis, the music would develop and evolve every night," recalls Nilssen-Love. "We would be all very equal..."

Now that much of the Large Unit's tour is already cancelled, Nilssen-Love is building a run of shows for 2021, replacing the already-booked gigs and adding several extras. Soon, there will be a Large Unit double vinyl release, which will present some of the extra material recorded at Moldejazz 2018. Thankfully, the record plants are still open and running, their workers well accustomed to toxic-protection gear. Nilssen-Love also has a number of gigs and festival appearances lined up for the autumn of 2020, with his New Brazilian Funk outfit. The general outlook is bleak, with rays of improvised free-form dancing on the horizon!