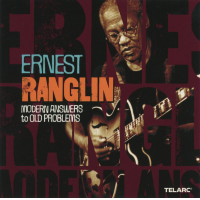 Few musicians blend pop and jazz as gracefully as 68-year-old Ernest Ranglin. His smash 1996 release Below the Bass line and follow-up Memories of Barber Mack effectively mixed jazz with reggae. On his last release In Search of the Lost Riddim (1998), the Jamaican guitar virtuoso extended his jazz-reggae recipe to include pop music from Senegal and vocals by Senegalese superstar Baaba Maal.

Modern Answers to Old Problems is similar to its immediate predecessor, but this time the focus is on jazz, reggae and Nigerian popular styles. Modern Answers offers steamy polyrhythms, raging grooves, buoyant melodies and clever improvisations. It's a terrific cross-cultural jazz release, and an irresistible listen.

A pioneer of both ska and reggae and an expert jazz guitarist to boot, Ernest Ranglin has played with Bob Marley, Jimmy Cliff, Sonny Rollins, Patti Page and Monty Alexander, to name a few. Marley once tried to hire Ranglin as his full-time guitar teacher and musical director, but the guitarist declined. Ranglin remains an understated guitarist with a keen sense of rhythm, and these days he is exploring the West African roots of Jamaican music.

He teams here with master rhythmist Tony Allen, the drummer who propelled Fela Kuti's classic Afro-funk in the 1970s. Drums stand at the forefront of the mix, a production gimmick that might annoy if a lesser musician were involved. But Allen is such a clever skinsman, his cranked-up drumming actually elevates Ranglin's music. Saxmen Denys Baptiste and Courtney Pine act as free-ranging foils for Ranglin's guitar work. And reggae singer Sylvia Tella (Steel Pulse) dazzles with her sultry, elastic singing on about half these songs. Tella wraps her multilingual voice around the syncopations generated by Ranglin, Allen and five London-based musicians, all of whom have Nigerian roots.

Modern Answers is funky, intricate, and it delivers one fiery solo after another. Highlights among the 10 original tracks include a lilting Afro-reggae piece called "Many Roots" and a danceable confection titled "Sound Invasion." Also noteworthy is "Inflight," an upbeat Latin-influenced composition featuring a lighting-quick solo by Ranglin, some far-out blowing by Pine, and Joe Bashorun's propulsive organ.

As Jamaican pianist Monty Alexander recently observed, Ernest Ranglin doesn't play reggae, jazz or blues -he plays all of them at once. There's a tropical accent to this album that's both languorous and lyrical. Modern Answers is as infectious as Fela Kuti's best material, and that's high praise.