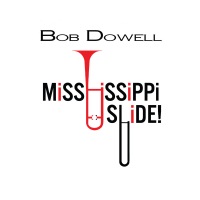 Trombonist and group leader {{Bob Dowell]] has an impressive debut disc, following many successful years as a sideman. With the able assist of Tony Thomas on B3, Art Edmaiston on tenor, and the super tight rhythm team of drummer Tom Lonardo and bassist Tim Goodwin, Dowell surveys an era between the post-bop 60s and the experimental 70s. Born in London and now a resident of Greenville, Mississippi, he carries a transcontinental boatload of influences and mixes them into his own delightful concoction. The back cover resembles, likely intentionally, Blues Note records of the era.

As is the case throughout, the opening "Autumnal Fumble" allows all of the players room at the conversational table. The trombone takes center stage, and tenor and B3 take turns as well. The minor key organ opening bars set the stage for a bop romp with trombone and tenor sharing lines that clearly harken to J.J. Johnson. The title cut pays homage to Jimmy Smith with horns embellishing the theme. There is a crispness on "Isengrim" that speaks to the production as well as to the players' proficiency. The tenor break is highlighted by a busy and buoyant drum. With the trombone's introduction, again with drums and bass clearly adding to the mix as the B3 fades the song out, the groove won't be denied.

Following the busy rhythm team of bass, drums and organs, "Crawdaddy Blues" is a trombone feature that sounds like a multi-tracked horn. It stands out as the highlight of the album. Slides and single notes combine gorgeously, as the organ sets a foundation. The tenor solo is equally impressive, as is the almost funky organ solo. That organ then introduces the lone ballad of the set, the absolutely lovely "Southern Skies." Highlighting the band's diversity, the appropriately titled "Little Boogaloo" takes it out. Again, the band members get to stretch. Thomas is a genius on the B3 and the slinky trombone shows off Bob Dowell's prodigious talents. Edmaiston' tenor has a 1960s bar walking quality that dazzles. Organ, bass and drums come to life underneath. Trombone is echoed by saxophone, they come together, and back to the echo. The sudden ending is a delight. This will hopefully be the first of many more from Dowell and team.