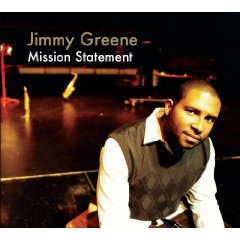 Possessing a concise pithy tone on his tenor sax that at times can be reverential, Jimmy Greene also surprises with an ability to translate that same depth to soprano, when making the switch for the odd tune. Greene's quartet consists of pianist Xavier Davis, bassist Reuben Rogers and drummer Eric Harland, and, while this ensemble fits squarely in the world of precise modern jazz, the tunes—due in equal measure to Greene's respect for melody and compositional skill—stand on their own as interesting listens.

This is not a shy rhythm section, and proves itself capable of laying in a very richly textured and supportive bottom and middle. It's joined on a majority of the album by guitarist Lage Lund, who possesses a tone as delicately beautiful as Greene's is juicy. This makes for some very fine moments, as Lund's web-like runs contrast with Greene's depth in a variety of stylistic settings, which occasionally benefit from Davis' funky fare on Rhodes. The opening title cut begins with Greene strongly stating an intricate theme, followed by Lund's soothing restatement that enchants and surprises with its cool mature feel.

Although the songs obviously differ in content— the funkiness of "Yeah You Right"; the spirituality and Trane-signifiers of "Love in Action"; the rhythmic complexity of "Mr. Octopus" and tenderness of "In Nelba's Eyes" and "Ana Grace"—it is the interplay that makes this a must-listen. Vibraphonist Stefon Harris also joins for a particularly strong performance of "Revelation" that artfully showcases his speed and improvising ability, alongside Greene's similar attributes on soprano. Mission Statement is a clear declaration that there is a whole lot of music in the horn and mind of Jimmy Greene.