By GEANNINE REID
September 7, 2017
Sign in to view read count 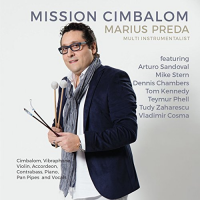 Rarely does an instrument come along with a band leader that is so worthy of attention for bringing a new and unheard sound to the world of jazz. With Mission Cimbalom, Marius Preda has accomplished both in one album. Preda performs on a cimbalom, which is a concert hammered dulcimer: a type of chordophone composed of a large, trapezoidal box with metal strings stretched across its top. It is a musical instrument commonly found in Hungary and throughout the group of Central-Eastern European nations and cultures. The many-faceted project, whose luster only grows with re-examination, features: Arturo Sandoval, Mike Stern, Dennis Chambers, Tom Kennedy, Teymur Phell, Sanah Kadoura, Taco Gorter, Robin Koerts & Kiba Dachi. It is Preda's life ambition to expose the world to this glorious instrument and to bring into focus its history, and cement its place it the jazz canon.

Mission Cimbalom is indeed an album that surpasses expectations and surprises with each track. The tunes cover a wide range of influences, solid grooves in straight-ahead swinging fashion, Latin, and funky exotic colored world beats. With virtuosic playing throughout, one might be tempted to characterize this as an all flash, with no substance, that would be a massive disservice. The album contains twelve compositions, eight of which are Preda's originals. As a bandleader, Preda has perceptively surrounded himself with a healthy roster of well-known guests, all of whom make solid contributions, as on the track "Adriana." This track features good friend, trumpeter Arturo Sandoval. The slow ballad allows Preda to arouse the sonic qualities of the cimbalom and the complex overtones, and the percussive attack created by the hand-held hammers. Preda's playing is clear and unadulterated, yet innovative in feel and magnified by his ability to create beautifully improvised melodies. Around the two-and-a-half-minute mark, the tune develops into a slow funk feel. Sandoval is spectacular as usual. Preda's responsiveness is equally stunning, with remarkably complex lines that make perfect musical sense.

As a composer, Preda covers a lot of stylistic ground, showing a strong musical pen for swing, Latin and funk. The funky jazz sound of " B.A.T.C." has all the sophistication of a bebop melody with the groove of a hard-hitting funk undercurrent, and both congeal nicely. Stern and Sandoval join Preda on this track and the three obviously share a chemistry that is magical. Preda has done a great job of writing a melody that fits Stern's style perfectly. Arguably, the most impressive of Preda's talents on display may be that of his passionate improvisations. The speed and accuracy of his lines are striking, but more importantly, they are melodic and rhythmically in the pocket. Sandavol's muted trumpet is on fire, this track is simply melodious. Perhaps Preda's biggest accomplishment, with Mission Cimbalom, is in thoroughly fulfilling his self-described mission to bring the cimbalom to the jazz world and keep this ancient instrument alive. This is certainly accomplished, as his cimbalom playing is the foundation from which the songs grow their gorgeous improvisations, and this maximizes the exotic flavor. The fact that he has done so without it ever feeling like the abundance of talent present was underutilized, is nothing short of noteworthy. Mission Cimbalom is a worthy listen for the far-ranging musical styles, virtuosic soloing and experiencing the Cimbalom, all performed with clear emotion and heart.