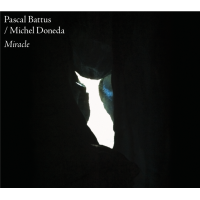 Following hard on the heels of Sillons -Reflets by Patricia Bosshard, Onceim and CoÔ, the first album from the Potlatch label since its lone release in 2019, it is a pleasure to welcome the label's second release of 2021, Miracle by the duo of Pascal Battus and Michel Doneda. Each of them has a long history with Potlatch; Doneda first recorded for the label in 1998 on the solo soprano saxophone album Anatomie Des Clefs, and before this one his most recent Potlatch album was Strom in 2004, a quartet album with Doneda alongside the Italian soprano saxophonist Alessandro Bosetti; in contrast, Battus first recorded for Potlatch in 2001 in the four-guitar quartet Misere et Cordes, on the album Au Ni Kita; he last appeared on the label in 2016, on the double album Pascal Battus-Dafne Vicente-Sandoval, where he was credited with "rotating surfaces" in a duo with the bassoonist of the title.

Despite such connections, Battus and Doneda only performed together as a duo for the first time in December 2016; after that they played together a couple of times before this recording was made in July 2020. While Battus has history as a guitarist, here he is again credited with "rotating surfaces"; apparently, these are generally mechanisms from old Walkmans (remember those?) which are made up of small plates put in motion by electric motors, on which vibrators and resonators (sheets of paper, plastic, metal, wood styrofoam et cetera) come to react. Doneda has undergone no major changes to what and how he plays; his instruments are the straight soprano saxophone and its smaller cousin the sopranino saxophone; he is totally committed to improvisation. Across five tracks, ranging in length from six-and-a-half to over thirteen minutes, a total of fifty-one minutes, Battus and Doneda sound as if they have played together for far longer than five years; the sounds they make fit together well, combining into an integrated soundscape which feels like one entity rather than different sounds juxtaposed—as good a combination of instruments with electronic sounds as we are likely to hear.

As a listening experience, the album richly rewards the time invested in it and reveals ever more with repeated listening. It is in complete contrast to the compositions heard on Sillons -Reflets, which demonstrates the breadth and variety of the Potlatch catalogue.