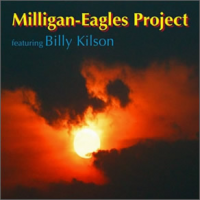 The word "considered" is not something one would usually associate with the fusion genre. All too often fusion players engage in a kind of demonstrative overplay that concerns itself far too much with technical virtuosity and considerably less with plain musicality. While Canadian bassist Mike Milligan and guitarist Wayne Eagles don't have the same recognition factor as the third member of their trio for this project—drummer Billy Kilson, who has worked with artists including Dave Holland, Chris Botti, and Larry Carlton—they demonstrate a similar concern for the overall shape and complexion of sound. Fusion Milligan-Eagles Project may be, but it's more the kind of thoughtful fusion of John Abercrombie, Dave Holland, and Jack DeJohnette's Gateway Trio, where space and melody is paramount and instrumental virtuosity, while never in question, remains strictly in service of the material.

Milligan, who contributes three of the nine compositions, has studied with Holland and George Mraz, worked with artists including saxophonist David Binney, pianist Richie Beirach, and Canadian guitar icon Sonny Greenwich, and was the bassist for The Shuffle Demons, a group that gained considerably notoriety in Canada but, sadly, nowhere else. Possessed of a warm tone and unhurried confidence, his writing ranges from the folk-like ambience of "Like Water" to the more riff-driven funk of "Skunk Theory." His opening solo on "Exit Wounds" demonstrates that he's equally comfortable exploring the free side of things as he is laying down the powerful groove to which the tune eventually evolves.

Eagles may possess the technical prowess to shred with the best of them, but he rarely resorts to pyrotechnics, although his solo on "Exit Wounds" approaches the kind of power of John McLaughlin, but in a more Holdsworthian legato style. His acoustic work on the tender "For the Love of Trains" demonstrates a genre-bending approach indicative of the broad range of styles in which he's worked for the past thirty years as a performer and educator in his hometown of Ottawa. With a tone that ranges from down-and-dirty to warm and clean—in the case of the closer, "Plankton Comes Alive," in the space of the same tune—Eagles is equal parts jazzer and psychedelic cruncher.

Kilson's power was on constant display during his tenure with Holland, and there's no shortage of it here, including his paradoxically relaxed yet frenetic work on trio's cover of Holland's "How's Never." But his more spacious and delicate work on "For the Love of Trains" is something of a revelation, a side of Kilson that rarely gets to be heard.

As engaging as the composed pieces are, most revealing are the two purely improvised pieces, which demonstrate everyone's ability to work in a freer context. "Improvisation 1," in particular, is equal parts soundscape and open exchange.

For fans of fusion with forethought and a liberal dose of unencumbered free thinking, Milligan-Eagles Project featuring Billy Kilson is just what the doctor ordered.