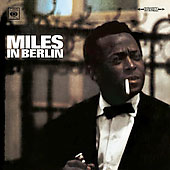 Finally on CD in the United States, Miles in Berlin can be viewed by Davis completists as a Rosetta Stone in his long career. It is the very first recording by what would later be dubbed the second great quintet, capturing the group in a transitional period. Largely considered one of the greatest jazz bands ever, the new quintet consisted of musicians who seemed kindred to each other. And starting at the Berlin Philharmonie on September 25, 1964, listeners of Davis would know it.

This was only the band's third date together, but it's the first one that was recorded and released (until now in Europe only). From August of 1964 until the quintet's first studio date in January of 1965, the group would play a song lineup consisting almost exclusively of classic Davis tunes. Songs like "Milestones and "So What had sat on a shelf long enough, it would seem, until Davis allowed his new band of young guns to bring their youthful flair to the old repertoire.

One highlight on the new reissue is a slow, lyrical version of "Stella by Starlight not featured on the LP. In each song, the mental affection between the players is strikingly evident. The interplay between Davis and Shorter on tenor saxophone does not, as one would expect, call to mind the bandleader's previous relationship with John Coltrane. Instead, Shorter, plays with a sound all his own—not only playing scales at a breakneck speed or with an audible spiritual yearning, but realizing an internal, truly improvised aim to compose music from out of the air.

Herbie Hancock, only 22 year -old at the time, does Davis justice by not attempting to replicate the work of pianists of the past, such as Wynton Kelly or Red Garland. With Hancock, a fresh sensibility is heard—a near-classical feel, but sped up to swing with the other virtuosos. Amazing really, that Hancock here almost sounds like a fusion of both Bill Evans and Wynton Kelly. What a player he could have been on Kind of Blue, had he been of age. Musician's musician Ron Carter proved a perfect counter to 17 year-old drummer Tony Williams, who is the true pace-setter in the group.

This quintet, perhaps more than any other band in jazz history, was able to not only experiment with time signatures and tempo, but always make the experiments work. For proof, check out "So What, the album's only modally constructed tune. After hearing Miles In Berlin, also check out the group's dynamic Plugged Nickel date. It was recorded over a year after the band's Berlin appearance, and by then, the quintet had been into the studio for a host of original tunes. Yet Davis still opted to play old repertoire which pre-dated his current band. Try and compare. The differences are immense, and the mental bonds of the musicians are at their peak.

With each gig, this quintet stripped another stereotypical element from the acoustic jazz cliché until finally a redefinition of the musical genre had taken place.

How many bands can say that?

Chad Kushins is a reporter and music reviewer from Long Island, New York.