It's a session that continues to acquire a strong following, having the potential, even, of pulling within striking of distance of 'Kind of Blue' 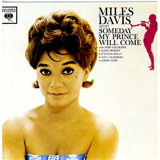 Recorded over the course of three days in April of 1961, Someday My Prince Will Come is at once a curiosity and a masterpiece, a recording that not only captures trumpeter Miles Davis' group in flux but practically crystallizes the very moment of transition. As on Kind of Blue (Columbia, 1959), for which the leader brought back pianist Bill Evans, Davis again turns to the past, this time calling upon two recent alumni to participate on three of the tracks. But far more than an historical document, Someday My Prince Will Come is a thing of beauty, an indispensable addition to the Davis recorded canon.

Unfortunately, a disproportionate amount of attention has been devoted to the opening, title track. Following solos by a Harmon-muted Davis, tenor saxophonist Hank Mobley, and pianist Wynton Kelley, the leader appears to take the tune out but instead ends on a deceptive cadence, suspending the dominant chord long enough for the tenor saxophone of John Coltrane to join the party for two undeniably dazzling choruses of alternate, extended harmonies and blistering pyrotechnics. Especially those listeners less familiar with Mobley's than Coltrane's work tend to make much of the obvious disparity between the two, interpreting it either as a sign of Coltrane's unassailable superiority or Mobley's middleweight mediocrity.

In retrospect, and especially after reading the liner notes with trumpeter Eddie Henderson's first-hand, sympathetic account of Mobley's status as the newcomer, it's difficult not to come away with some sense that Mobley was "blind-sided" on this occasion. Whereas Coltrane clearly makes the dramatic entrance of a man on a mission, Mobley is merely trying to please his boss, contributing a solo, moreover, that's based on the tight-lipped, minimalist model of the one immediately preceding him. The result is "respectable" but hardly representative Mobley. Neither a motivic power player like Rollins nor an incantatory harmonicist like Coltrane, Mobley is one of the instrument's premier bel canto "singers," an unabashed Romantic who habitually plays his heart out, rarely subjecting the inspiration of the moment to potentially life-killing (and song-ending) intellectual scrutiny. But in this rare instance he pauses—and pauses again—then again—each time up to an entire measure of empty space elapsing before, realizing his time is about to run out, he hastily inserts an arbitrary and lame closing tag.

Coltrane sits out on the tune's alternate take (not included on the original release), which finds Mobley back on his game, going repeatedly to the uppermost note of his solo until its lyric ring is unmistakable, then neatly tying it all together in unhesitating, characteristic Mobley-esque fashion. Nevertheless, the earlier Coltrane solo, while not doing any favors for Mobley, sets the stage for all that follows, elevating the session from an historical curiosity to another perpetually fresh, time-resistant classic by a Davis ensemble less "transitional" than state of the art.

"Old Folks," a ballad as sentimental and wistfully nostalgic as its title suggests, acquires unaccustomed urgency and poignancy when distilled to its essence by the steely, penetrating Davis trumpet, followed by its fleshing out in the warm, round tones of Mobley's tenor on the first of several flawless turns by the saxophonist. As Henderson's written account reveals, Davis was far from sold on the suitability of Mobley as a replacement for Coltrane—and Mobley was all too aware of his new employer's reservations. Saxophonist Sonny Stitt, another provisional member of the Davis ensemble following Coltrane's departure, had been subjected to withering criticism (or, worse, cold disregard) by his employer, especially for attempting to play bebop figures on the modal scales of "So What." But whereas Stitt stood his ground, sticking to his Charlie Parker-shaped story and then simply moving on, it's apparent that Mobley took especially seriously the question of his acceptance by jazz's frequently inscrutable Prince of Darkness.

With the exception of the released version of the title track and "Teo," a Mid-Eastern modal piece on which Davis revisits some of his upper-register work from "Saete" (Sketches of Spain, (Columbia 1959), Mobley acquits himself almost as impressively as he would on the group's on-location recordings, In Person at the Blackhawk, Vols. 1 and 2 (Columbia, 1961). On "Teo" Davis simply stopped the first take in midstream and turned once again to Coltrane for the definitive, released version of the tune. Frankly, it's unlikely there was anyone besides Coltrane capable not only of sustaining the exotic, suspended-meter spell woven by Davis' incandescent trumpet but of intensifying and deepening it, probing the darkly beautiful dimensions beneath the song's enticing angular surface.

Besides the Coltrane/Mobley meeting, the session affords the listener a unique opportunity to contrast the "new" drummer, Jimmy Cobb, with his predecessor, Philly Joe Jones, who sits in on "Blues No. 2," a track available only on the CD reissue. Cobb plays with a broad, generous stroke and a brilliant, ringing ride cymbal, creating open swinging spaces for the soloists to explore, clearly anticipating the prominent role of the ride cymbal in the playing of his successor, Tony Williams.

Jones who, like Coltrane on the title tune, sounds like a man out to prove something, favors the snare and executes with a shortened, tight stroke, perfect for the crisp, quick repartee he engages in with the leader. In that respect he's closer to Max Roach than to Cobb or Williams, yet there's an unmistakable difference. Whereas Roach, the "Dean" of modern jazz drummers, would maintain a busy polyrhythmic conversation, or "counter-chatter," with the soloists, Jones plays more like a horn player himself, his phrases intricate but relatively symmetrical, rattling off the same bebop licks as those favored by the idiom's leading exponents. In fact, listening to the drummer and his former employer on this track is not just a little like hearing some of the sparring matches between Charlie Parker and trumpeter Dizzy Gillespie as on Bird and Diz (Verve, 1950).

As might already be inferred, Someday My Prince Will Come is a Davis recording rich with contextual, historical and autobiographical significance (including the cover photo of a woman whose appearance the leader insisted upon as a condition for the album's release). Those listeners who insist on making much of the "shoot-out" between Mobley and Coltrane would do well to withhold judgment until hearing the two tenor giants going after one another on at least three other recordings, each granting the players generous amounts of solo space: Johnny Griffin, A Blowin' Session (Blue Note, 1957); John Coltrane, Two Tenors (Prestige, 1957); Hank Mobley, Tenor Conclave (Prestige, 1957). On the latter session, featuring four tenors, Mobley follows Coltrane as the consummate clean-up hitter on an especially memorable version of Irvin Berlin's "How Deep Is the Ocean?"—climaxing in a surprisingly forceful Mobley cadenza.

But Some Day My Prince Will Come is a recording that can be recommended solely on its intrinsic merits, not the least of which is the uniformly excellent playing of the trumpet player. For this reason, along with the consistently high level of the other individual performances as well as the unmistakable guiding if not shaping influence of the strong-willed, focused and visionary leader over virtually every measure of the music, it's a session that continues to acquire a strong following, having the potential, even, of pulling within striking distance of Kind of Blue.