By Colin Fleming
September 22, 2004
Sign in to view read count

the Antibes set is very nearly punk jazz, not in the Jaco Pastorius sense, but as an obliteration of rhythmic balance in fostering a rampant energy... 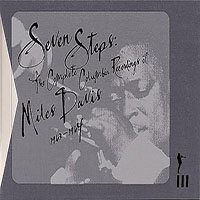 One of the more undervalued phases in Miles Davis' career, the years 1963-64 are typically deemed a fallow period, marked by a few mildly inventive studio creations and scattershot radio broadcasts. Davis' transformations were often stylistic, but this collection puts the bulk of its emphasis on a progression more simply conceived, the exchange of one artistic setting for another, from the studio to the stage for a series of almost satirically manic live performances. With ideas of modality, stylistic developments, and technical advancement being quite beside the point, this is Davis in hell-for-leather mode.

Long anticipated, Seven Steps opens with session material from the title album and then corrals sets from Antibes, Berlin, and Tokyo—the latter with Sam Rivers— to go along with that most rockish of all jazz dates, the February '64 Philharmonic Hall performance—in this case, with an added track. Feeling his way through a number of bands—or more specifically, how one constant rhythm section reacts with three contrasting tenors—one might assume Davis' results would be somewhat ramshackle, a search for a cohesive sound rather than another outpouring of art in an evolving career.

But what is soon discernible across this box's five and a half discs of live material is that there is little so strange and visceral in jazz as what any of these bands do to these songs—having at them, flaying them open—that even in the early sixties were chestnuts of a sort. If we're willing to look past the virtuosity of the George Coleman edition of the group—difficult as that is—the Antibes set is very nearly punk jazz, not in the Jaco Pastorius sense, but as an obliteration of rhythmic balance in fostering a rampant energy that isn't dissimilar to what the Sex Pistols generated in '76, to be broadminded about it.

That the Antibes material then seems low-key compared to the Philharmonic concert suggests the obsession with playing ever-faster, louder, at all costs, is a self- perpetuating, ongoing one, nonetheless allowing the argument that these outings marked the beginning of a stretch of years where there was no better jazz drummer than Tony Williams. At times playing the ride cymbal exclusively, the snare at others, his technique is unpredictable and yet always ideally suited to a given passage, the narrative devices and channels within a song, an aural representation of Big Bill Broonzy's exhortation to "hit the right lick." Davis' own playing throughout is somewhere just below the peaks of the early fusion years, and yet there is joy, and a different kind of expression, in listening to how clearly he appears to be just flat-out gassed by his rhythm section.

These ensemble grooves never prove to be less than memorable, which might suggest there is less concern with individuals, but whether it's Ron Carter, Herbie Hancock, or Sam Rivers in his discomfiting sojourn with the band, one could transcribe each line, rhythmic gesture, and arpeggio and sit down with a bounty of worthwhile studies. By the time we get to Wayne Shorter's contributions on the seventh disc, from the classic quintet's Berlin Philharmonie appearance, it's clear that Davis' music, despite the routine set list, is changing again, in a more profound, intuitive way than the sonic outbursts of the earlier sets. But for anyone who thought the expanded Blackhawk sessions offered top groove, the middle parts of this box rival almost any live document from the Who's Fillmore East to Coltrane in Seattle to Eric Dolphy's Five Spot albums, as marking out that strange patch between form and anarchy where risk is constant and rhythm a throbbing, inescapable mass. Come for the music, wither at the barrage.

Visit Legacy Recordings on the web.